MUCH attention given to inequality in Singapore in recent years has focused on income inequality. There is a good reason: Singapore’s income gap, as measured by the Gini coefficient for income, is one of the widest among developed countries at 0.478.

The Gini measures how income is distributed in a society. The closer the Gini is to 1, the more unequal the distribution of income.

To narrow this gap, the Government has made efforts to raise wages at the bottom and increase taxes on wealth at the top. Among other things, it has given cash handouts and supplemented incomes with Workfare Income Supplements for low-income earners.

It is also working with tripartite partners to boost incomes for low-wage sectors. It recently required cleaning companies to follow wage guidelines for cleaners’ starting pay.

In addition, the Government has started extracting a bigger pound of flesh from the rich through the tax system. Last year’s Budget introduced more taxes on high-end assets, including luxury cars and homes.

Some analysts are predicting more such moves to help lessen the income divide in this year’s Budget on Feb 21.

But the income gap is only one part of what separates the rich from the poor. Another – possibly more alarming – factor fuelling economic and social inequality is wealth inequality, according to a number of recent studies.

INCOME often refers to earnings from work, although it can include income from other sources such as rent. Wealth measures income accumulated over time, so it tends to have a cumulative effect over years. Wealth also includes assets in the form of property, stocks and inheritances. All these can grow in value separately from income.

A person with zero income can be very wealthy. A person may have $10 million in assets (and is hence considered wealthy) but can have zero income in a particular year – if he is not working and does not collect rent or dividends from his assets. Income and wealth must be taken together for a fuller picture of a household’s true economic power.

A separate report by the International Monetary Fund (IMF) last October said that the ratio of private wealth to national income in the world has more than doubled since 1970. This means wealth is growing more quickly than incomes.

“Household wealth is very unequally distributed – even more so than income,” the report said. “In advanced economies, the top 10 per cent own, on average, more than half of the wealth (up to 75 per cent in the US),” it added.

This means wealth is “arguably, a better indicator of ability to pay than annual income”, the report said.

Another reason the wealth gap is as significant as – if not more significant than – the income gap is that a build-up in wealth can become entrenched over time and is harder to redistribute.

For example, a rich family with houses worth $10 million can pass them on to their children, who may use those houses as collateral or capital to buy more property or build businesses to accumulate another $20 million for their descendants. And the cycle goes on.

So while wealth inequality has received less mention in Singapore than income inequality so far, it is arguably an even more important challenge facing our society.

SO HOW wide is the wealth gap in Singapore?

There are no official numbers on wealth distribution in Singapore. But piecing together different data gives some clues. 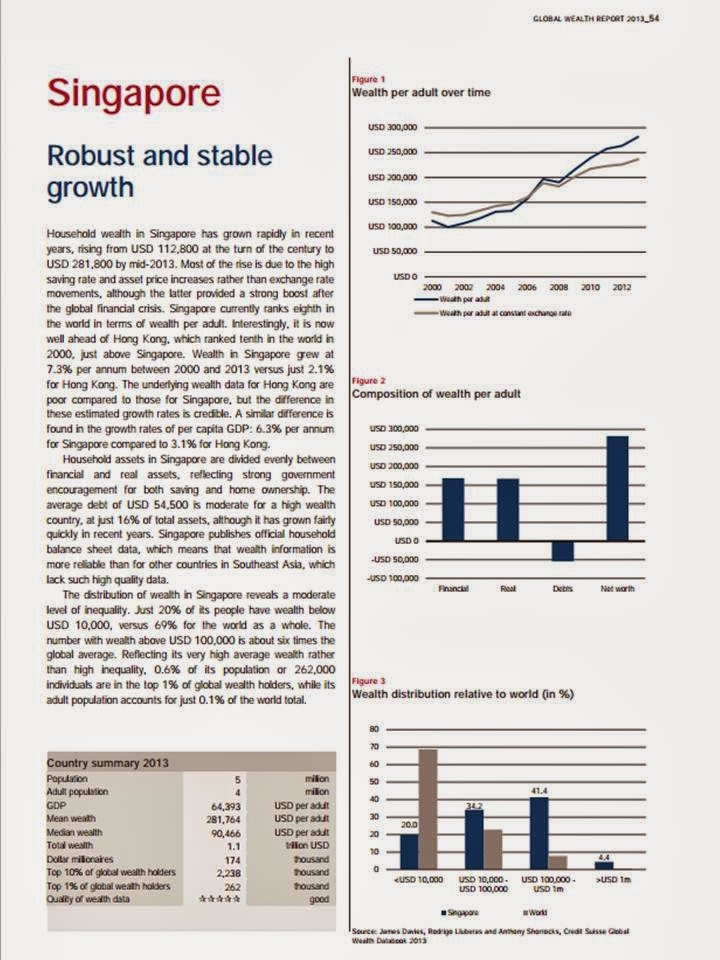 A global wealth report released by Credit Suisse last October said Singapore’s median wealth per adult (aged 20 and above) was US$90,466 (S$114,925), which means half of Singapore’s adults had more, and half had less than that amount. But the mean wealth per adult was US$281,764. This adds up the total amount of wealth held by every adult, divided by the number of adults.

This gap between the median and the mean is one of the biggest in the rich world, according to the Credit Suisse report. It implies that much of the wealth in Singapore is in the hands of a few. Unlike the median, the mean can go up significantly if the total wealth is pulled up by a few super-rich individuals.

Indeed, the report showed that the top 1 per cent of Singapore’s wealthiest hold more than a quarter of the country’s wealth.

It also illustrated the wealth gap in another way. Some 4.4 per cent of Singapore adults have more than US$1 million in wealth, while 20 per cent have less than US$10,000, the report said.

Of the other 215 countries surveyed, only Denmark and France had both a larger percentage of adults at the very top and at the very bottom, indicating a wider wealth gap than Singapore.

What are some reasons for this vast gulf in wealth?

One could be the property price surge. This is significant given that nine in 10 households here own their homes and the home makes up half of a household’s net wealth in Singapore.

While reports from third parties such as Credit Suisse shed some light on the wealth gap, they are not comprehensive.

Panel studies that track wealth of the same family or individual over time would also give a better sense of wealth inequality in Singapore, he added.

INEQUALITY in wealth has an impact on social mobility. There are reasons to believe that wealth mobility could be even lower than income mobility. That is, the chances of someone from a nonwealthy family staying nonwealthy is high, the Credit Suisse report pointed out.

Also, an increase in wealth, unlike incomes, is not necessarily directly a result of work. This raises questions about how truly meritocratic Singapore can be. This is why – even though the goal for Singapore is not to equalise outcomes, but to equalise the starting opportunities in life – there is a strong economic and moral case for higher wealth taxes.

Apart from helping to reduce inequality, it can also be an efficient and effective way to raise revenue for public coffers, the IMF said in its report last October. “In principle, taxes on wealth also offer significant revenue potential at relatively low efficiency costs.”

The IMF also said increasing progressivity in property taxes is one of the best ways to tax the wealthy, which is exactly what Singapore is doing. This means taxing second and third homes more than the first, and taxing more costly properties at a higher rate.

Raising taxes is always a sensitive political and economic issue.

But with tax revenues needing a boost to match higher government spending on social safety nets – such as the recently announced Pioneer Generation Package – raising taxes on the wealthy is likely to be more effective than raising taxes on incomes alone.

Singapore should not be afraid to take the lead in this area.

Last year, Hong Kong’s South China Morning Post said Singapore’s Budget – and its imposition of higher wealth taxes – posed questions for Hong Kong’s own fiscal options: “The Singapore way may not be ours, but it does raise the question whether our top tier of wealth or income should be seen to pay more to help bridge inequality. It is a debate in which the wealthy should take part, in the interests of the city in which they prospered.”

The same can be said for Singapore. After so much focus on income inequality, it is time to kick-start a discussion on how the wealthy can contribute more to bridge inequality.