They should press on to invest in automation to further strengthen food security: Minister

They used to pick out the bad eggs by hand, but this was not easy as the defects were like hairline cracks.

But from next month, workers at Seng Choon Farm can leave it to a machine that can go through 120,000 eggs an hour, sorting out bad ones more accurately and efficiently.

The machine of more than $2 million was co-funded by the Agri-Food and Veterinary Authority (AVA) through a $63 million fund launched last August to help farms here boost yields and increase productivity.

"If we continue to ramp up our local production in cost-effective ways, we can become more self-reliant over time," he told some 300 food industry players gathered at Orchard Hotel for an AVA convention.

Seng Choon now produces 400,000 eggs per day, and hopes to increase this to 600,000. Its managing director Koh Yeow Koon said a lot of the technology for farming was developed in Western countries with large farms.

"Here, the farms are generally small to medium-scale. It's a steep investment (for us). To use these technologies, we need a helping hand from the Government," he added.

Metropolitan Fishery Group, which is opening a fifth fish farm next year, used the fund to buy movable aerators, machines that increase oxygen in the water. Previously, its farmers went around in speedboats, using the engine to churn the waters.

Its chief executive Malcolm Ong said: "Doing it manually takes up time. With the aerator, we can dedicate more manpower and time to taking care of the fishes."

Yesterday, Mr Wong said Singapore can do a lot more to further strengthen its food security.

Every year, each person here consumes more than 300 eggs, 300 bowls of rice, 70 packs of leafy vegetables, 30 whole fish and 20 whole chickens. Singapore imports more than 90 per cent of its food from 160 countries worldwide. 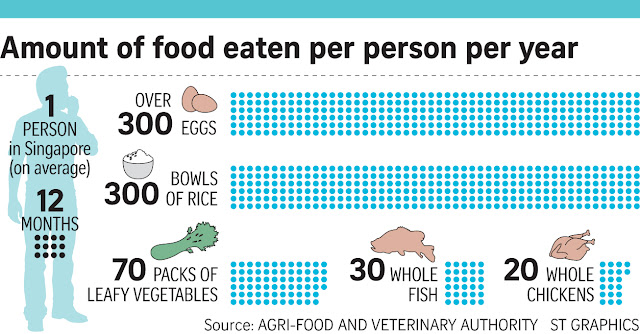 He said local farms and manufacturers should invest in automation through technology and streamline operations to be more competitive.

This year, Singapore was ranked the second-most food secure country, behind the United States, in the Economist Intelligence Unit's Global Food Security Index. Last year, it was fifth.
at 3:56 PM