Donald Trump winning the US presidency is considered one of the top 10 risks facing the world, according to the Economist Intelligence Unit.

The research firm warns he could disrupt the global economy and heighten political and security risks in the US.

However, it does not expect Mr Trump to defeat Hillary Clinton who it sees as "his most likely Democratic contender".

He is rated as riskier than Britain leaving the European Union or an armed clash in the South China Sea.

China encountering a "hard landing" or sharp economic slowdown and Russia's interventions in Ukraine and Syria preceding a new "cold war" are among the events seen as more dangerous.

"Thus far Mr Trump has given very few details of his policies - and these tend to be prone to constant revision," the EIU said in its global risk assessment, which looks at impact and probability.

The EIU ranking uses a scale of one to 25, with Mr Trump garnering a rating of 12, the same level of risk as "the rising threat of jihadi terrorism destabilising the global economy". 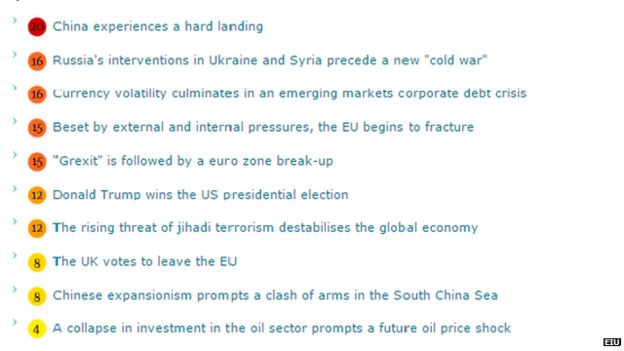 "He has been exceptionally hostile towards free trade, including notably Nafta, and has repeatedly labelled China as a 'currency manipulator'," the EIU said.

It warned his strong language directed towards Mexico and China in particular "could escalate rapidly into a trade war".

Mr Trump has called for a "big big wall" to be built on the US-Mexican border, paid for by Mexico, to keep its illegal immigrants and drug dealers out of the United States.

Analysis: Anthony Zurcher, BBC News North America reporter
Why is Donald Trump considered only slightly less of a threat to global security than a new Cold War? Perhaps it is because unlike traditional presidential front-runners the candidate has little or no policy substance to back up his shoot-from-the-hip-style pronouncements.

Want details on how the New Yorker would restructure US trade relations with China? Or how he would implement his proposed Muslim immigration ban? Good luck finding out.

Mr Trump has been promising to reveal his foreign policy team since mid-February, but the deadline keeps getting extended.

A well-developed foreign policy campaign structure would provide not only substance behind Mr Trump's rhetoric, it would also give foreign leaders connections for their questions.

So far, however, it seems international affairs and national security experts in the US are more focused on stopping Mr Trump than trying to help him. Until that changes, expect the global alarm bells to continue to sound.

On the campaign trail, Mr Trump has advocated killing the families of terrorists and invading Syria to eradicate the so-called Islamic State group and appropriate its oil.

"His militaristic tendencies towards the Middle East and ban on all Muslim travel to the US would be a potent recruitment tool for jihadi groups, increasing their threat both within the region and beyond," the EIU added.

However, the businessman is moving closer to clinching the Republican presidential nominee ticket after winning most of the popular vote in primary elections.

Mr Trump, who has no prior political experience, has said his supporters would "riot" if he was denied the nomination.

In the event he does win the nomination and presidency, the EIU forecasts that domestic and foreign policymaking will be undermined.

"Innate hostility within the Republican hierarchy towards Mr Trump, combined with the inevitable virulent Democratic opposition, will see many of his more radical policies blocked in Congress," it said.