China’s ‘charming towns’ plan turns into a nightmare for investors, amid legal crackdown

Initiative was to dot the countryside with themed villages, like Crayfish Town, Poetry Town, Fairyland Town, and Happy Town
Collapse of a funding company has seen senior executives detained by police, and thousands of investors scrambling for answers 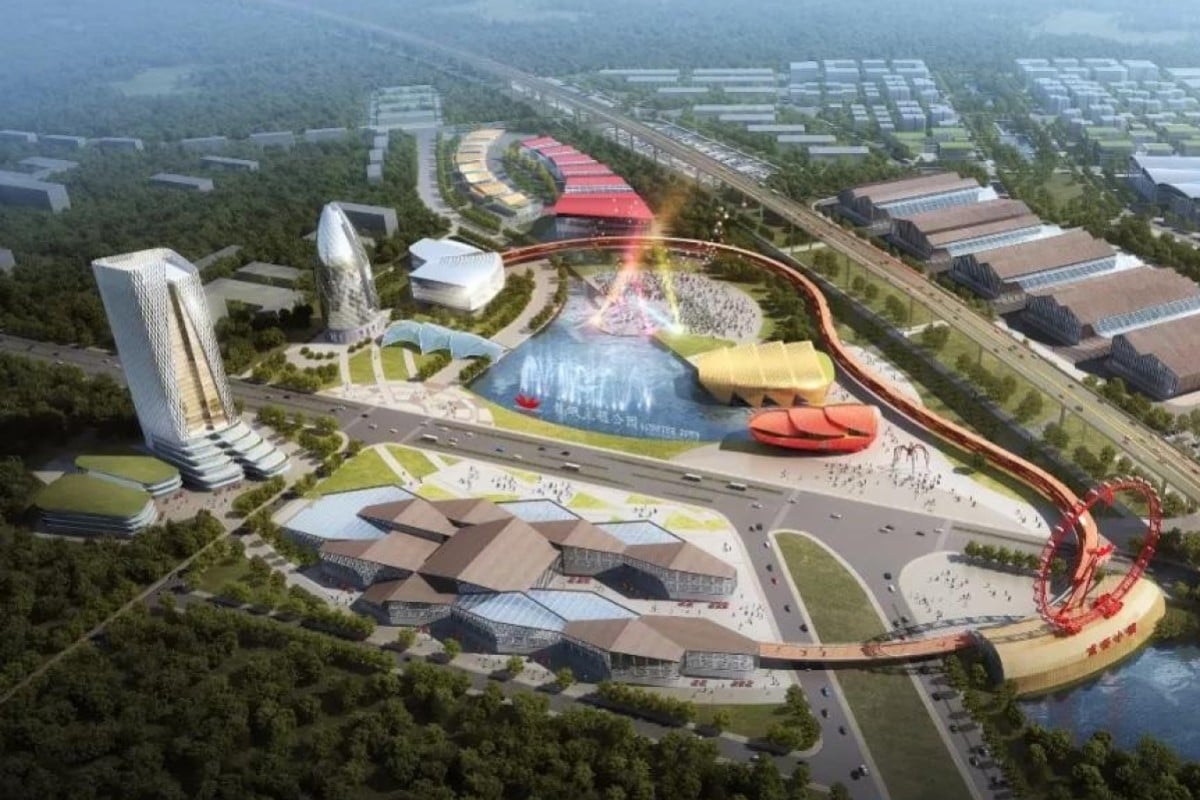 An artist's impression of the Crayfish Town, created by JC Group. Photo: Handout

But last week’s collapse of a private company behind many of these developments has seen dozens of senior executives detained by police and thousands of investors scrambling for answers, desperate to recoup their money. The sudden failure of JC Group, based in the city of Hangzhou in Zhejiang province, marked another bankrupt fundraising programme in China and exposed the huge risks behind the country’s state-led, debt-fuelled development drive.

There are thought to be 3,800 individual investors exposed to JC Group’s collapse, and while no figure has been put on the expected total losses, the minimum threshold for these investments was set at 1 million yuan (US$148,480).

It also brought into sharp focus the so-called “grey rhino” risks which haunt China’s economy. The term refers to big and neglected financial risks, such as the 2008 financial crisis, which are usually telegraphed in advance, but which are not stopped until it is too late.

JC Group, established by businessman Wei Jie in 2008, acted as an agent between local governments eager to raise funds to develop the local economy and affluent Chinese investors searching for high returns.

JC Group signed agreements with local governments to to develop more than 50 charming town projects across the country. Among them was Happy Town, which was to be built in the sleepy riverside town of Yucheng, in the Yangtze River Delta.

When visited by the South China Morning Postin 2017, Happy Town’s blueprints for a sex toy shopping street, a sex exhibition centre and an “adult-only” hotel, seemed a world away from the town’s traditional sights of grapes, mulberry trees and turtle ponds. The project had a price tag of 10 billion yuan (US$1.5 billion).

But despite the often bizarre nature of these developments, the money poured in.

JC Group used its local government agreements as a selling point to raise funds from investors via China’s unregulated “shadow banking” channels. The company sold at least 350 “private funds” to designated investors, raising billions of yuan by promising annual returns as high as 12 per cent.

One document from JC Fortune, a wealth management arm of JC Group, said it had 70 billion yuan (US$10.4 billion) in assets under management as of September 2017.

However, the gravy train came to an abrupt stop on April 28, when the police bureau of Gongshu, a district in the city of Hangzhou, the capital of China’s eastern Zhejiang province, issued a statement saying it had detained Wei and other senior JC Group executives on charges of “illegal fundraising” – a criminal offence that carries a maximum punishment of life in prison.

The police statement asked JC Group investors to register their complaints using an online system, but warned them not to engage in any “illegal demonstration activities”.

However, the scorned investors decided to take action despite the warnings of the authorities.

Hundreds of disgruntled investors signed a petition addressed to the public security department of Hangzhou and the provincial government of Zhejiang last week, demanding that local governments take responsibility for either endorsing and signing deals with JC, or for failing to supervise the company’s fundraising methods.

“JC Group is very high-profile in Hangzhou and even in Zhejiang province. It has its own building there and it has been focusing on financing public-private partnership (PPP) projects for years. It paid a large amount of taxes to local authorities there,” said Jay Li, an investor from Guangzhou who put money into JC’s charming towns fund.

[Translation: "a large amount of bribes..."?]
Li, who runs two Cantonese restaurants in Guangzhou, was sold on the idea of investing in charming towns by a good friend, a former banker, who eventually became a sales manager at JC Group.

The pair travelled to visit the site of the proposed Crayfish Town, in Jiangsu province, and found a booming crayfish industry and what appeared to be a solid business opportunity. Li was sold on the idea, as was his friend, the JC salesman, who invested his family’s life savings.

[Evidence of "due diligence"!]
Wei’s arrest, however, put paid to their optimism. The thought of having invested in an illegal scheme has enraged Li, since these schemes often result in heavy losses.

“Why did it suddenly become illegal fundraising?” Li asked. “If JC has long-standing violations for illegal fundraising and fraud, all the local governments signing deals with the company owe us an explanation, as do Zhejiang’s securities regulators, industry and commerce departments, and tax authorities.”

Liu Lijia is a successful businessman in Hangzhou in his forties who invested 1 million yuan (US$148,480) in a JC Group fund for an Asian Games Town, named after the games set to take place
in Zhejiang in 2022. The prospect of losing this investment has devastated him.

Liu was contacted by a JC Group salesperson in June 2017, who sold him on the idea of investing in a town constructed around the theme of one of Asia’s premier sporting events. Wary of losing his money, he conducted his own due diligence by visiting the city of Huzhou in Zhejiang, which will host some parts of the games.

“Before signing a contract with JC, I even went to the construction site to have a look with a few other potential investors,” Liu said. “We went through all the PPP documents carefully, including a resolution released by the local people’s congress to bless the partnership between JC and the local government.”

[Evidence of "due diligence"!]
However, since Wei’s arrest, phone calls to the Huzhou government have gone unanswered. Few local governments that have signed deals with JC Group had made any public statements about the situation.

Both Li and Liu have experienced countless sleepless nights. They have created several WeChat groups to share their stories and connect with other investors. They are worried that if Wei is sentenced for illegal fundraising, JC’s assets will be sold for a fraction of what they were marketed for, therefore affecting their investments.

[The PRC/CCP central govt is not too concerned about "the rule of law". ]
Liu is one of 3,800 individual investors who stand to lose their principal investment in JC products. He said he is not an aggressive investor. While he thought investing in private business products and property development was too risky, he thought JC Group would be a safe bet, given that the funds were to be used in PPP projects backed by local governments.

“I thought it was smart and safe to invest in projects backed and promoted by the Chinese authorities, like the ‘Belt and Road Initiative’ or new urbanisation [projects],” Liu said.

The “thousand charming towns” strategy fits with President Xi Jinping’s desire to modernise and urbanise much of China by 2050. The target brought enthusiastic responses from village and towns across China, where local governments have been scrambling to come up with a “theme” of their own, since the initiative was conceived in 2016.

Beijing’s attitude towards the charming towns project has also changed, since it has clearly deviated from the initial aim of transforming parts of China into a “beautiful country”.

In Suichang County, near the city of Lishui in Zhejiang province, plans were afoot to build a “rural e-commerce entrepreneurship town” in partnership with JC Group.

When contacted by the ﻿Post, a member of staff at the county’s bureau of commerce said: “It’s not a good time to comment on JC right now,” adding that “the development of Suichang’s e-commerce town was our key project, but it is suspended now”.

Simon Zhao, founding director of the International Centre of China Studies in Hong Kong University, said that the rush to build charming towns was unsustainable and that there was no economic logic behind many of the plans.

[Counter argument to the "due diligence" evidence. Just because you read prospectus, and visit the site, but don't look at the wider "economic logic" and instead subscribe to the "economic fairytale" spun to you by the sales team, you just wasted your time.]
At a meeting in early-April, China’s National Development and Reform Commission, the country’s powerful economic planning agency, said the government will support “orderly development” of towns but “phase out fake towns abusing the concept”.

[Evidence that "Centrally Planned Economy" cannot beat "Diversified Fraud".]
For investors who have already pumped their money into China’s charming towns, this decree may be too little, too late.
This article appeared in the South China Morning Post print edition as: ‘charming Towns’ investors turn ugly in scandal