SINGAPORE — Values that relate to a sense of community, nationhood and security resonate most strongly with Singaporeans, with filial piety and safety and security of one’s family taking the top spots for the most important values, a survey by the Institute of Policy Studies (IPS) has found.

In contrast, Singaporeans place less importance on accumulating wealth, the survey found. Values related to an entrepreneurial spirit. such as risk-taking and enterprise, also took a backseat.

The wide-ranging study, conducted as part of the Our Singapore Conversation (OSC) project, interviewed a representative survey of 4,000 Singaporeans from December last year to January.

“Singaporean youth seem to place greater emphasis on perseverance and self-reliance, compared to their older Singaporeans. The young also had a greater appetite for risk-taking, enjoying life to the fullest and being more entrepreneurial,” the survey found.

IPS research fellow Dr Leong Chan Hoong, one of the researchers involved in the study, noted that the “differences are actually not that stark and there’s actually quite a lot of shared agreement on some of the attributes”.

“I think that bodes well because at least there’s a common platform that everybody can sit on and to agree on what are the different actions to be taken for Singapore,” he said.

When it comes to social values, the survey found that "society in general does not accept gay lifestyles", although the younger and more educated segments of the population were relatively more accepting. Overall, 47 per cent of respondents rejected gay lifestyles, while 26 per cent said they accepted gay lifestyles, The remaining 27 per cent did not have a preference.

Yet, older Singaporeans did seem to place more value in censorship as a means of protecting public interest, the survey found.

Faculty Associate at IPS Tan Ern Ser, another researcher involved in the study, said: “So under this kind of situation (where there’s diversity in views) I think there’s a need for a lot more dialogue, a lot more communication.” This, he said, could help reach “a consensus despite the diversity and potential polarisation”.

While more Singaporeans preferred to keep taxes low, the more affluent Singaporeans (those living in private property or earning above S$7,000 a month) seemed more willing to pay higher taxes to support the needy. Support dipped slightly, however, for those earning S$10,000 or more a month.

Earlier in the month, a portion of the IPS survey findings were released in the OSC committee’s report, Reflections. The findings showed that public housing is the top concern for Singaporeans earning less than S$5,000 a month while the country’s healthcare infrastructure is what worries the higher income groups most.

Singaporeans valued good governance, with those earning less than S$7,000 placing greater emphasis on a caring Government, while those earning more prioritised having an honest Government.

When asked more specifically about different facets of governance, the IPS survey found that a “sizeable majority indicated that the Government was forward-looking and managing the country well”.

“There were relatively lower levels of agreement on whether the Government understands the concerns of the people or did a good job explaining policies,” the survey found.

Assoc Prof Tan said: “We hope that the survey, understood as a component of the OSC process, has given us a better appreciation of the range of views held by Singaporeans, including our own, and thereby work towards making Singapore an even better home, nation, and economy.”

The full report can be downloaded at https://www.oursgconversation.sg/survey/ 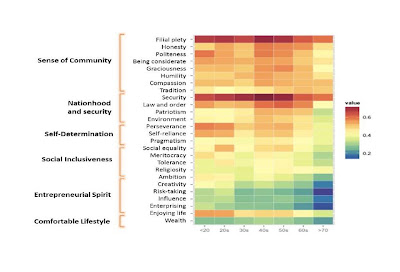 The rising challenge of our fragile food security

The world is being haunted again by the spectre of a global food shortage.

Demand for food over the next decade is expected to increase by 1.1 per cent annually. But global food productivity gains have declined from 2 per cent in 1970-2000, to 1.1 per cent today — and are continuing to decline.

A 2011 study reported that the world consumed more than it had produced for seven out of the past eight years. These concerns will lead to growing attention paid to the nexus between food, water and energy resources, especially as climate change is expected to have an increasing impact globally.

Nineteenth-century economists struggled with the Malthusian dilemma: As populations rose, it was assumed that a forced return to subsistence agriculture would act as a check on population growth. The reality was that the opening of new agricultural land, technological innovation and higher-yielding crops resulted in a capacity to feed an ever-growing population.

Prayer addiction - the highs and lows


AS EVIDENCE accumulates about the many health benefits of religious practice, prayer is looking better and better. Some atheists have gone public with their own prayer-for- health's-sake practice.

Take Mr Sigfried Gold, the subject of a recent article in The Washington Post. A thoughtful, articulate man, he lives in Maryland, and just turned 50. He is passionate about philosophy and long ago decided there was no stuff in the universe that was not physical - no supernatural, no divine.