Why US banks aren't lending

The purpose of the Fed's liquidity facilities and the US Treasury's US$700 billion (S$1 trillion) troubled asset relief programme was to restore credit markets. If banks could continue to lend, businesses and consumers could continue to borrow, and the US and world economies would be prevented from stalling.

So what is the report card on the Treasury and Fed initiatives? Each Friday at 4.15pm, the Fed publishes the assets and liabilities of banks in the United States, including both US-owned banks and the US operations of foreign-owned banks. 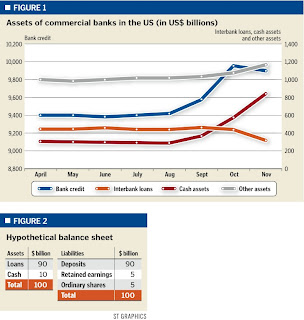 Apparently, in terms of overall lending to end-user consumers and businesses, the US government initiatives seems to have averted a breakdown in lending. Bank lending accelerated from US$9,414.5 billion in August to US$9,958.1 billion in October, and then fell by just US$55 billion to US$9,903.1 billion last month. These statistics contrast with the chorus of complaints from consumers and industry that they are being starved of credit.

What explains the banks' huge accumulation of cash? The answer can be summed up with three-and-a-half words - 'risk aversion' and 'Basel II'.

The Basel committee on banking supervision sets capital standards for internationally active banks. In 2004, the committee agreed on the new Basel II framework. This specifies a minimum regulatory standard - that banks must have capital equivalent to at least 8 per cent of risk-weighted assets.

To understand why banks have hoarded cash, consider a hypothetical bank with a very simplified balance sheet, in billions of dollars (Figure 2).

However, the bank's liabilities did not change. To balance its balance sheet, it must write down its retained earnings by the same $4.5 billion, thus reducing its tier-1 capital to $5.5 billion. Relative to total risk-weighted assets of $85.5 billion, the bank's capital ratio would now be 5.5 of 85.5 = 6.4 per cent.

How could a mere 5 per cent writedown of loans cause the capital ratio to fall by almost two-thirds from 11.1 per cent to 6.4 per cent? The answer: leverage. The bank operated with a leverage of 9 to 1 ($90 billion of deposits to just $10 billion of retained earnings and share capital).

An important way for a bank to assure others was to increase its capital ratio above the Basel II standard. Within the last month, even well-regarded institutions like Banco Santander of Spain have raised additional capital - ?7.2 billion (S$14.3 billion) to raise its tier-1 capital ratio from 6.3 per cent to 7 per cent. The name of the game in banking has been who can boast the highest capital ratio.

So when the US Treasury and Fed ploughed hundreds of billions of dollars into the financial system, much of the cash did not flow through to lending. It remained as cash.

In a climate of extreme risk aversion, the choice is obvious: Keep the funds in cash for a higher capital ratio. In just three months, banks in the US accumulated more than half a trillion of the green stuff.


The writer is Lim Kim San Professor of Business Policy and Professor of Information Systems and Economics at the National University of Singapore. Economic Watch is a weekly column rotated among Senior Writer Tion Kwa and guest columnists.