The Story of Low Wei Jie. 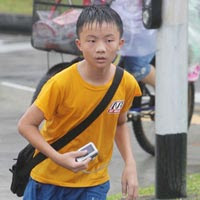 Low Wei Jie keeping up with torchbearer Kwa Chin Lum, 28, as the Youth Olympic Flame passed through the north-east district yesterday. The 12-year-old followed the relay for 21/2 hours, running for 15km in his flip-flops and snapping pictures. (original photo link broken. This is a replacement photo.)


THERE were two constants during yesterday's morning session of the Youth Olympic Flame torch relay.

One was the flame itself, as it weaved its way through Sengkang, Punggol and Hougang. The other was schoolboy Low Wei Jie, 12.

Dressed in an orange T-shirt, blue bermudas and flip-flops, he clutched his digital camera and stuck with the relay.

'When I read in the newspapers that the flame was coming here, I just wanted to see it for myself, and follow it,' explained the drenched Compassvale Primary School pupil afterwards. 'I might never see it again.'

His day had started bright and early at Greendale Secondary School in Punggol, where Deputy Prime Minister Teo Chee Hean had passed the torch to Greendale student Yogesh Kumar, whose tag '3001' meant he was the first torchbearer of the third day of the relay.

At first, nobody paid any attention to the boy in the orange T-shirt. An hour later, however, the mystery runner started to get noticed.

'Wasn't that boy present at the start?' asked a cameraman.

The boy would disappear from sight, only to reappear from among supporters lining the streets to snap pictures as torchbearers handed the flame from one to the other.

'I can't believe it, that boy is back again!' exclaimed someone in the relay entourage.

He kept pace right up until the 122nd torchbearer jogged into Hougang Stadium, where the relay paused for a 15-minute break.

It was at the stadium carpark that Wei Jie soon found himself the centre of attention as reporters, officials and Youth Olympic Games volunteers made a beeline for him.

'None of this was planned,' said the Primary 6 pupil. 'I didn't know I was going to run all this way.'

He said he wanted pictures for his scrapbook, and his favourites were shots of two schoolmates who were torchbearers. 'I'm sure they'll like the photos,' he said.

His morning's adventure was not without some pain. His flip-flops may have held up, but his feet hurt, and there were bloodied scratches on his right ankle.

Then he discovered to great consternation that the camera he had borrowed from his parents was not waterproof and had jammed.

'There are other pictures in it that my mother wanted to keep,' he said. 'I hope she doesn't scold me!'

An only child, Wei Jie lives with his parents in Rivervale. They had given him permission to follow the relay, but were surprised to learn how his morning turned out.

His mother Cindy, 45, an operator in a logistics company, said she got worried when she called home and he did not answer the telephone. 'He had said he was just going to run as far as Sengkang and I thought he forgot to take his house key,' she said.

As for the camera, she said: 'Never mind if it's broken. We can always replace it. I'm just happy he's okay.'

At Hougang Stadium, Wei Jie was doing much better than okay.

As word of his solo trek spread, strangers came up to tell him they thought he was something special.

The six support runners who had followed the flame posed for pictures with him, and handed him a spare torch to hold. It was the first time he had touched the symbol of the Youth Olympic Games.

Even the Traffic Police officers who had accompanied the relay got off their motorcycles when they spotted him and came over to do some back-slapping.

TWO days ago, Low Wei Jie was just another 12-year-old schoolboy. Yesterday, he woke up something of a celebrity.

Yesterday's report in The Straits Times about how he ran almost 15km over 2-1/2 hours trailing the Youth Olympic Games (YOG) torch through Sengkang, Punggol and Hougang moved many readers.

He had run in flip flops, got drenched in rain, and ended up being cheered by YOG officials, volunteers and traffic policemen who had noticed his dogged determination to keep pace with the flame.

Best of all: Tomorrow, he will be running again, as an official torch bearer as the flame relay goes through Singapore's Central district.

'I'm quite nervous about the whole thing,' he admitted. 'I hope I don't drop it.'

He was the star attraction when he arrived in school yesterday and was invited by principal Chua Choon Guan to stand before the morning assembly.

According to Wei Jie, Mr Chua praised him as a source of inspiration for the entire school.

Then came news that the Ministry of Community Development, Youth and Sports and the Singapore Youth Olympic Games Organising Committee had decided that he should be given the honour of being a torch bearer.

But that was not all.

Mr Palmer said reading in The Straits Times about Wei Jie's feat had touched him so much that he bought the tickets as a gift.

'I was truly moved by the courage, determination and passion that Wei Jie has for the YOG. I just wanted to do something for him and his family as a reward,' said Mr Palmer.

'Maybe we should have him in our YOG team!'

Praise kept flowing in from everywhere.

Security manager R. V. Nathan, 60, said: 'I was very impressed with this boy's spirit, that he never gave up. He is a great example for other young children.'

Classmate Heng Jing An, 12, said: 'Wei Jie is a really unique and special person. It's very rare for someone to be so fully committed and passionate about something.'

The school canteen operators offered congratulations. Some classmates chided him for not taking them along.

'They all wanted to know how I did it,' said Wei Jie.

The principal wanted to see all the pictures he took of the torch bearers, 'but I had to tell him the camera was jammed'.

His parents' camera was damaged in the rain, but the memory card that stored the pictures was preserved and by evening, he was able to show off his spoils on a computer.

Both Panasonic and Canon hope to get in touch with Wei Jie, to replace the camera.

Wei Jie's parents, Cindy and Wilson, both 45, said their son's adventure kept them busy too, yesterday.

'Our handphones have not stopped ringing since morning,' said Mr Low, a property agent.

'It's not just our relatives who are calling. Everyone seems to want to talk to him. I'm very proud of him and what he accomplished yesterday. He showed great perseverance.'

Last night, the couple took their son shopping in Hougang for a new pair of running shoes, in preparation for tomorrow's relay run.

Because of work, they will not be able to attend the relay. Instead, daughter Jing Wen, 14, will play photographer.

Asked about being on the other side of the camera, Wei Jie said: 'I think I prefer chasing the flame. But carrying the torch will be a great experience too.'

Young Low Wei Jie may have damaged his mother's camera when he chased after the Youth Olympic Flame torch relay and took pictures in the rain on Tuesday, but he now has a new one.
Panasonic yesterday handed a brand-new Lumix DMC-FT2 camera to his school principal Chua Choon Guan, who then presented it to Wei Jie during an evening assembly at Compassvale Primary School.
It is also water-proof.

YESTERDAY'S front-page report ('Who's that boy?') about the spontaneous feat by Primary 6 pupil Low Wei Jie, who followed the Youth Olympic Games (YOG) torch relay for 21/2 hours while wearing flip-flops, was inspiring.

What struck me was his determination to act on something that was dear to him.

For me, he recalled the refreshing feeling of childhood innocence that many of us once had during a less complicated time of our lives.

I thank Wei Jie for reigniting the fond memories of childhood exuberance.

Perhaps the YOG organisers could consider featuring him as the last runner of the torch relay - surely, a fitting symbol of the passionate spirit of youth.