Towards the end of poverty

The world’s next great leap forward

Nearly 1 billion people have been taken out of extreme poverty in 20 years. The world should aim to do the same again 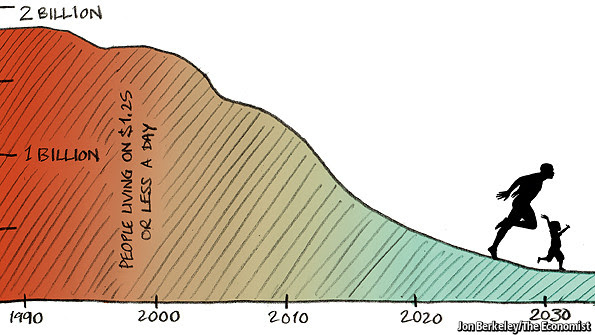 IN HIS inaugural address in 1949 Harry Truman said that “more than half the people in the world are living in conditions approaching misery. For the first time in history, humanity possesses the knowledge and skill to relieve the suffering of those people.” It has taken much longer than Truman hoped, but the world has lately been making extraordinary progress in lifting people out of extreme poverty. Between 1990 and 2010, their number fell by half as a share of the total population in developing countries, from 43% to 21%—a reduction of almost 1 billion people.

Now the world has a serious chance to redeem Truman’s pledge to lift the least fortunate. Of the 7 billion people alive on the planet, 1.1 billion subsist below the internationally accepted extreme-poverty line of $1.25 a day. Starting this week and continuing over the next year or so, the UN’s usual Who’s Who of politicians and officials from governments and international agencies will meet to draw up a new list of targets to replace the Millennium Development Goals (MDGs), which were set in September 2000 and expire in 2015. Governments should adopt as their main new goal the aim of reducing by another billion the number of people in extreme poverty by 2030.

Nobody in the developed world comes remotely close to the poverty level that $1.25 a day represents. America’s poverty line is $63 a day for a family of four. In the richer parts of the emerging world $4 a day is the poverty barrier. But poverty’s scourge is fiercest below $1.25 (the average of the 15 poorest countries’ own poverty lines, measured in 2005 dollars and adjusted for differences in purchasing power): people below that level live lives that are poor, nasty, brutish and short. They lack not just education, health care, proper clothing and shelter—which most people in most of the world take for granted—but even enough food for physical and mental health. Raising people above that level of wretchedness is not a sufficient ambition for a prosperous planet, but it is a necessary one.

The world’s achievement in the field of poverty reduction is, by almost any measure, impressive. Although many of the original MDGs—such as cutting maternal mortality by three-quarters and child mortality by two-thirds—will not be met, the aim of halving global poverty between 1990 and 2015 was achieved five years early.

The MDGs may have helped marginally, by creating a yardstick for measuring progress, and by focusing minds on the evil of poverty. Most of the credit, however, must go to capitalism and free trade, for they enable economies to grow—and it was growth, principally, that has eased destitution.

Poverty rates started to collapse towards the end of the 20th century largely because developing-country growth accelerated, from an average annual rate of 4.3% in 1960-2000 to 6% in 2000-10. Around two-thirds of poverty reduction within a country comes from growth. Greater equality also helps, contributing the other third. A 1% increase in incomes in the most unequal countries produces a mere 0.6% reduction in poverty; in the most equal countries, it yields a 4.3% cut.

China (which has never shown any interest in MDGs) is responsible for three-quarters of the achievement. Its economy has been growing so fast that, even though inequality is rising fast, extreme poverty is disappearing. China pulled 680m people out of misery in 1981-2010, and reduced its extreme-poverty rate from 84% in 1980 to 10% now.

That is one reason why (as the briefing explains) it will be harder to take a billion more people out of extreme poverty in the next 20 years than it was to take almost a billion out in the past 20. Poorer governance in India and Africa, the next two targets, means that China’s experience is unlikely to be swiftly replicated there. Another reason is that the bare achievement of pulling people over the $1.25-a-day line has been relatively easy in the past few years because so many people were just below it. When growth makes them even slightly better off, it hauls them over the line. With fewer people just below the official misery limit, it will be more difficult to push large numbers over it.

So caution is justified, but the goal can still be achieved. If developing countries maintain the impressive growth they have managed since 2000; if the poorest countries are not left behind by faster-growing middle-income ones; and if inequality does not widen so that the rich lap up all the cream of growth—then developing countries would cut extreme poverty from 16% of their populations now to 3% by 2030. That would reduce the absolute numbers by 1 billion. If growth is a little faster and income more equal, extreme poverty could fall to just 1.5%—as near to zero as is realistically possible. The number of the destitute would then be about 100m, most of them in intractable countries in Africa. Misery’s billions would be consigned to the annals of history.

That is a lot of ifs. But making those things happen is not as difficult as cynics profess. The world now knows how to reduce poverty. A lot of targeted policies—basic social safety nets and cash-transfer schemes, such as Brazil’s Bolsa Família—help. So does binning policies like fuel subsidies to Indonesia’s middle class and China’s hukou household-registration system (see article) that boost inequality. But the biggest poverty-reduction measure of all is liberalising markets to let poor people get richer. That means freeing trade between countries (Africa is still cruelly punished by tariffs) and within them (China’s real great leap forward occurred because it allowed private business to grow). Both India and Africa are crowded with monopolies and restrictive practices.

Many Westerners have reacted to recession by seeking to constrain markets and roll globalisation back in their own countries, and they want to export these ideas to the developing world, too. It does not need such advice. It is doing quite nicely, largely thanks to the same economic principles that helped the developed world grow rich and could pull the poorest of the poor out of destitution.