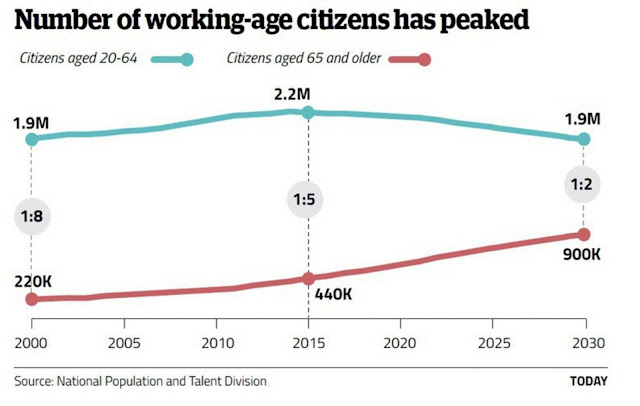 SINGAPORE — Stressing how demographics would define the country’s destiny, Prime Minister Lee Hsien Loong said yesterday that the ageing population would cause profound problems for the country and that the impact is already being felt today.

Speaking at the seventh annual Ho Rih Kwa lecture organised by the Singapore Management University, Mr Lee said: “Based on trends, if we project into 2050, even with immigration, the population pyramid will be inverted ... We are going to be growing old faster than any society in the world.”

He added: “Who will pay the taxes, to spend on whom? How do we keep (the economy) prosperous, vibrant and forward looking? Who will man the Singapore Armed Forces and defend us? We can’t be the Dad’s Army.”

Mr Lee noted that the Republic had enjoyed “favourable” demographics for the past five decades, with a post-war baby boom. Fortunately, the nation was able to educate the baby boomers, create enough jobs for them and make them “valuable assets” contributing to Singapore, he said.

“Had we not been able to do that, they might have ended up (as) migrant workers abroad, working in tough jobs with low wages, because the alternative of staying at home was even worse.”

Last year, the total population here grew by 1.3 per cent — its slowest pace since 2005, while total fertility rate continued to fall despite the Government’s incentives and encouragement, said the Prime Minister.

As a result, there has been a rise in “sandwiched” families, where two or fewer working adults are supporting both younger and elderly dependants. There is also more demand for healthcare and social services, Mr Lee said.

The Government has responded by helping seniors “age well and live fulfilling lives” through home ownership and good healthcare, for instance.

Other policies such as the Central Provident Fund and Silver Support Scheme, which provides permanent handouts to eligible seniors, are also in place to provide them with a good foundation for retirement, said Mr Lee.

“Ultimately, the best and, indeed, the only fundamental solution is for Singaporeans to marry and, after they marry, to have more children.”

The Government has made efforts to encourage Singaporeans to tie the knot and have babies, such as by promoting flexible work arrangements, providing quality healthcare and childcare, as well as helping young couples with housing. It will do more of these progressively, said Mr Lee.

Some of the initiatives have borne fruit: There were 24,000 Singaporean marriages, the highest in the past decade.

Nevertheless, Mr Lee reiterated that the Government could not tackle the demographic challenge alone. “It requires all of us to change norms and culture to become a more family-friendly country. These shifts take time. But we must start now and hopefully, in 25 years, we will be able to benefit from some of the results.”