SINGAPORE - What was supposed to be an easy win for the Workers' Party (WP) in Aljunied GRC in this general election turned out to be a knife-edge battle for survival.

The People's Action Party (PAP) team pushed the WP "A" team to the wire, as voters turned out in huge numbers for the ruling party all across the island.

In the end, the WP led by party chief Low Thia Khiang, 59, retained Aljunied against a tide of white, winning the GRC with a slim 50.95 per cent of votes cast, a drop of 3.77 percentage points from its winning share in 2011.

The race for Aljunied was the closest for the night and saw the PAP team asking for a recount as the difference in the margin was less than 2 percentage points. 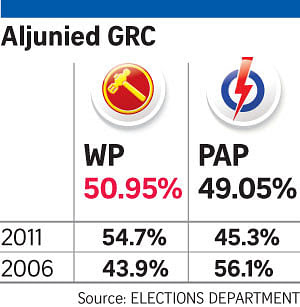 A sober-looking Mr Low said that the WP had run a good campaign and that he was satisfied with the performance of its candidates in the face of a huge national swing to the PAP.

"Yes, unfortunately we lost Punggol East, but that's elections. You win, you lose, that's part and parcel of life," he said. "If you look at the result, it's a massive swing. The WP has done pretty well."

He also congratulated the PAP on winning a strong mandate and securing its fourth-generation leadership.

The PAP team comprising Mr Yeo, insurance firm director Victor Lye, 53, senior bank officer Chua Eng Leong, 44, former teacher Shamsul Kamar, 43, and lawyer K. Muralidharan Pillai, 47, was dubbed by some as a "suicide squad", up against the WP heavyweights who made history in 2011 when they won the opposition's first GRC.

But at several points throughout last night, it seemed as though Aljunied GRC could return to the PAP.

News of big PAP wins elsewhere started to worry WP activists as early as 9pm, who were also hearing that their support was dropping across the five Aljunied GRC wards.

WP heavyweights Ms Lim and Mr Chen lost their wards to their PAP counterparts but big wins from Mr Faisal's and Mr Singh's wards managed to tip the GRC over to the WP.

But Mr Singh won his ward with a share of about 55 per cent, while Mr Faisal took over 1,000 more votes than his rival in Kaki Bukit. Mr Low also won in Bedok Reservoir by about more than 1,000 votes.

The WP's poor performance was a huge turnaround from 2011, when it won all the five wards in Aljunied. That led to the exit of two PAP Cabinet ministers - then Foreign Minister George Yeo and Minister in the Prime Minister's Office Lim Hwee Hua.

WP activists last night were at a loss for words, saying that all indicators on the ground had pointed to a comfortable victory for the party in their stronghold.

One insider said: "All the signs were positive for a strong performance. No one can explain the results right now, we'll have to really analyse what happened."

Some WP supporters attributed the drop in support to the financial status of Aljunied-Hougang-Punggol East Town Council, which had become a major issue during the campaign.

[Note: AHPETC will now be AHTC.]
The PAP said the WP had mismanaged the town council, pointing to its questionable finances.

But WP leaders shot back, saying that there was no wrongdoing, with Mr Low declaring at one point that "I would be serving time if I was corrupt".

Mr Jay Tan, 28, a bank worker, said: "I'm surprised. You get the impression that support for the WP is good from rallies and social media. I think the town council issue worked to PAP's favour."

The PAP team, on the other hand, were triumphant in their defeat.

Former Cabinet minister Lim Boon Heng, who advised Aljunied team, said: "A heavyweight team against a team of rookies. I think we didn't do too badly."