Investment research firm says the government is ‘harming rather than helping the environment’ by subsidising the ‘green’ vehicles
13 April, 2016


Electric vehicles in Hong Kong could be adding “20 per cent more” carbon to the atmosphere than regular petrol ones over the same distance after factoring in the city’s coal-dominated energy mix and battery manufacture, a new research report found.

Investment research firm Bernstein also claimed that by subsidising electric vehicle purchases, the government was effectively “harming rather than helping the environment” at the expense of the taxpayer.

The report discloses that the author maintains a “long position” in oil company BP, while electric vehicle supporters are quick to dismiss its claims. 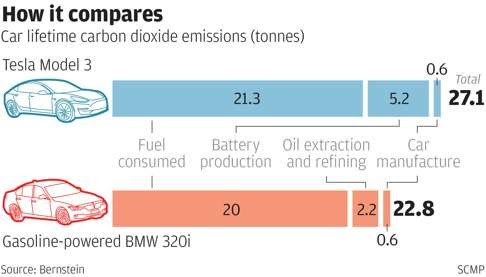 “The policy is to encourage drivers to be green, but they are actually subsidising vehicles that create more emissions of CO2 and particulates from power plants,” said Bernstein senior analyst Neil Beveridge.

“Electric vehicles can work in places where there is a very low carbon intensity in electricity generation, but more than 68 per cent of electricity [on Hong Kong Island] comes from coal.”
The researchers compared emissions over 150,000km for a BMW 320i using petrol and the new electric Tesla Model 3 and found the latter to be capable of emitting 27 tonnes of carbon – 20 per cent more than the BMW.

The analysis took into account carbon intensity – emissions per unit of GDP cited by HK Electric, which supplies Hong Kong and Lamma islands – fuel efficiency of the car, carbon dioxide produced over 100km, generating the electricity needed at the power plant as well as producing the 85 kilowatt-hour battery.

Fuel-related emissions alone for the Tesla totalled 21.3 tonnes, while building the battery accounted for 5.2 tonnes. By contrast, the BMW’s total fuel-related emissions – essentially the burning of fossil fuel – amounted to 20 tonnes of carbon, while the oil extraction and refining for the petrol generated 2.2 tonnes.

Beveridge urged the government to do more to reduce carbon in the fuel mix or to wait for battery technology to improve before attempting to push for mass adoption of electric vehicles.

Hong Kong has one of the world’s highest penetration of electric cars among new private car purchases. The number has grown from just 100 at the end of 2010 to 4,400 as of February.

Tesla has 70 per cent of the market.

Responding to enquiries, a Tesla spokesman said that the data cited in the report showed that CO2 emissions in electric cars were indeed "lower and far lower" than in gasoline-powered cars and “an incorrect report from an oil company investor does not change that.”

“Because of oil extraction, distribution, and refining, approximately 25 per cent more has to be added on top of that to calculate the real carbon footprint of gas-powered cars,” the spokesman added.

“Tesla’s mission is to build a more sustainable future, and it is clear that electric vehicles are an indispensable part of that.”

Mark Webb-Johnson of Charged Hong Kong, a support group for electric vehicles, disagreed with the report. While electricity consumption had been going up over the past 20 years, emissions from generation had dropped dramatically, he said.

“Almost every government around the world has done their own research and studied the benefits, and they are all promoting electric vehicles as a viable mechanism of reducing pollution.”

Webb-Johnson questioned the report’s calculation for carbon intensity. While HK Electric emitted 0.79kg of CO2 per kilowatt-hour, CLP, Power which supplies two million residential customers across Kowloon, New Territories and Lantau Island, achieved a lower figure of 0.63kg per kilowatt-hour due to the presence of nuclear in its fuel mix.

“The report seems to take the best case for petrol cars and the worse case for electric vehicles,” he added.

“The human exposure to roadside pollution is higher than power plants,” he said. “The government’s policy is justified.” The Environmental Protection Department said replacing conventional vehicles with electric ones could help to reduce roadside air pollution, and even under the current fuel mix the replacement could reduce greenhouse gas emissions.

About HK$2.7 billion in tax has been waived for electric vehicles since 1994. The EPD said it would carefully consider the waiver arrangement before the scheme ended next March.