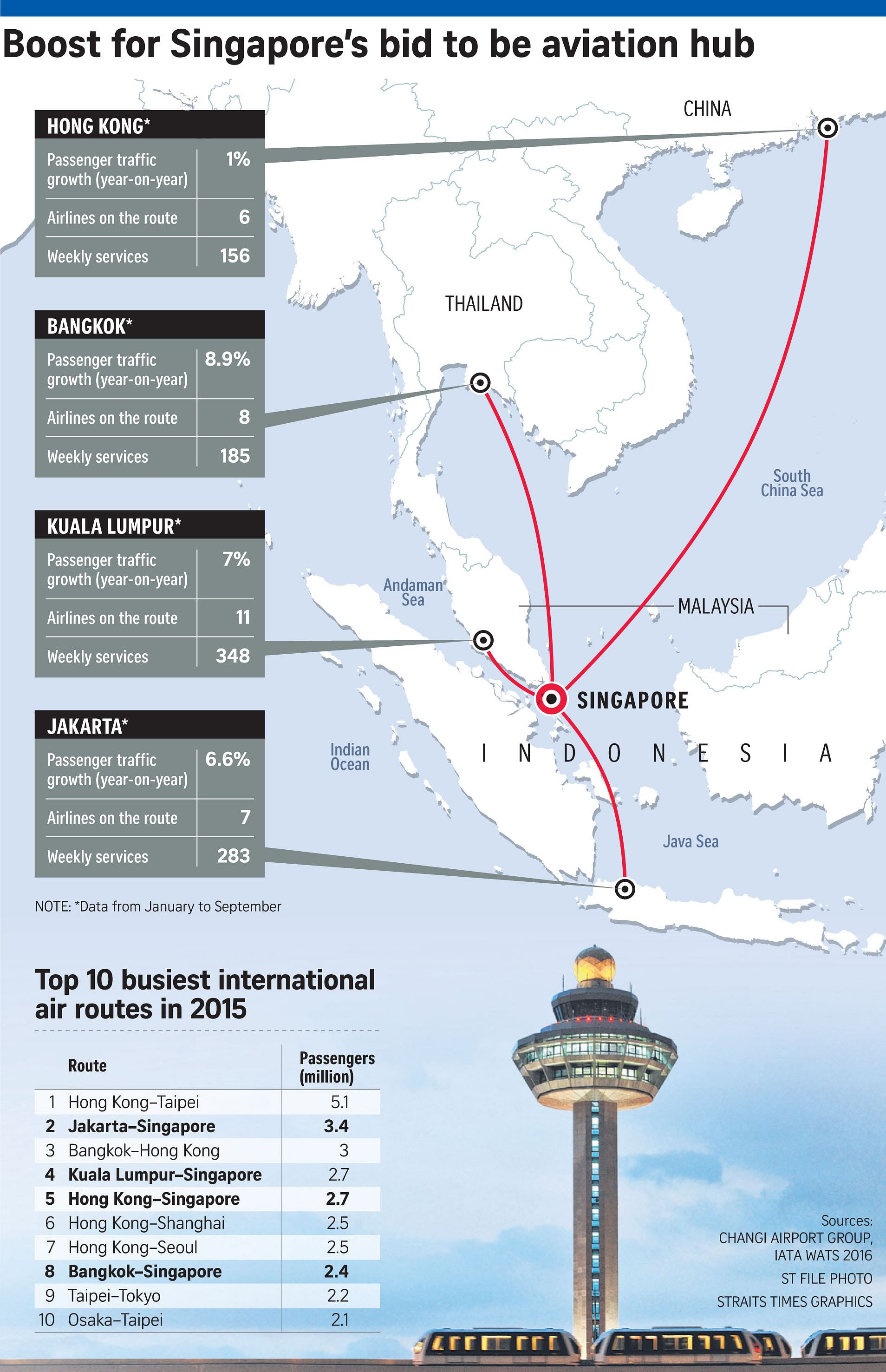 And Taipei is just behind with THREE of them.

Singapore sits at one end of four of the world's 10 busiest international air routes, it has been revealed. This boosts the country's aspiration to be Asia's key aviation hub despite the economic downturn.

But experts said Changi faces tough competition from other airports in the region, especially Hong Kong airport, which features in five of the top 10 routes.

The busiest route, based on last year's passenger numbers, is Hong Kong-Taipei. This is followed by Jakarta-Singapore. Kuala Lumpur-Singapore, Hong Kong-Singapore and Bangkok-Singapore are also in the top 10 list.

The data, compiled by the International Air Transport Association and presented at an industry conference last week, confirms Asia's dominance in air travel. All the top routes are flights in the Asia-Pacific.

Changi Airport Group spokesman Ivan Tan said the four cities - Jakarta, Kuala Lumpur, Hong Kong and Bangkok - have been on the airport's busiest routes for some time now. Together, they account for more than a quarter of Changi's total traffic. He and other experts expect numbers to go up.

This is unfolding as Asia develops and more people are able to afford air travel, especially with the proliferation of budget carriers and cheaper fares.

Ms Alicia Seah, director of public relations and communications at Dynasty Travel, said: "Due to proximity and affordability, Jakarta, Bangkok, Kuala Lumpur and Hong Kong are top destinations for Singaporeans as well as expatriates residing here looking for short breaks, or meeting and convention venues."

The current global economic uncertainties may, in fact, encourage even more people to take shorter trips as "corporate budgets may be slashed and consumers' confidence lowered", she added.

Mr Andrew Herdman, director general of the Association of Asia Pacific Airlines, said at the group's annual meeting in Manila last week that Asian airlines will continue to play an important role in shaping global aviation. Large populations with rising household incomes in China, India and many South-east Asian countries are the driving force behind strong growth in the demand for air travel in the region, he said.

With the Asia-Pacific established as the world's largest air transport market and growth anticipated over the long term, there is good cause for optimism, he added.

This is despite concerns over geopolitical instabilities, the rise of more cautionary attitudes towards globalisation and free trade, and potential oil price increases, he said.

In an update last week, US plane maker Boeing said almost four in 10 planes expected to be delivered to airlines over the next 20 years will end up in the Asia-Pacific.

Singapore is preparing for the growth with plans to open a fourth passenger terminal next year and a third runway by the early 2020s.

[And two days before, SIA was asked to cut flights to Jakarta. The #2 busiest route.]

SIA to cut 5 weekly flights to Jakarta, as directed by Indonesia due to runway maintenance works

SINGAPORE - Singapore Airlines will cut five weekly flights to Jakarta, from Dec 1, as directed by the Indonesian civil aviation authorities, the airline said.

SIA which has been operating 63 flights a week to and from Jakarta has been told to cut five flights a week due to runway maintenance works at Jakarta's Soekarno-Hatta International Airport.

The five affected flights are SQ962 and SQ963 on Mondays, Tuesdays, Wednesdays, Thursdays and Saturdays...