Amid all the panic buying, social distancing, toilet paper brawling, vacay cancelling, it turns out that there is an unexpected twist of events that is the Covid-19 crisis. A good one. Yes, really.

Air pollution has drastically declined in countries like Italy and China. Experts have found a direct correlation between mass lockdowns in cities (and the subsequent slowdown in human activity) and improved air quality. It’s a silver lining, albeit a bittersweet one. But in the midst of an unprecedented global pandemic, we’ll take this, thankyouverymuch. 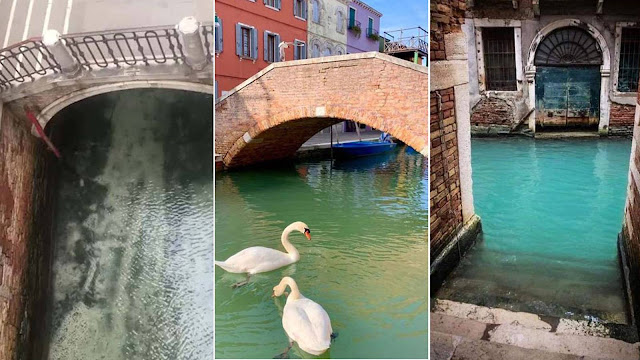 The usually-murky waters in Venice’s canals are looking crystal clear once again, as Twitter and Instagram users began noticing just one week after the nationwide lockdown was enforced.

On any given day, pre-coronavirus, these waters in the UNESCO heritage site are usually clogged with gondolas, vaporetti (water buses), ferries, other boats… and, of course, tourists. According to reports, the average month of March would see an influx of about 700,000 tourists.

But of course, we’re living in 2020 and this isn’t a regular month of March. Italy, which has seen the most number of people infected with Covid-19 outside of China, has been under total lockdown since Mar 9. Venice is just outside of the Lombardy region, which is the hardest hit area in the country.

This is a rare sight in the UNESCO heritage site that has been battling overtourism for years. Twitter user @IngridFalasteen, who posted pictures (above, extreme right) on Mar 17, noted: “Venice today with never before seen crystal clear water in the last 60 years, just after six days of quarantine.

Other Italian publications have noted that this has “brought back the lagoon waters of ancient times, those of the post-war period, when it was even still possible to bathe in the waters of the canals.”

Local authorities have clarified that this does not mean that water quality has improved — sediments are still present in the waters, but are staying at the bottom. “It's because there is less boat traffic that usually brings sediment to the top of the water's surface,” a spokesman had told CNN.

But there’s still an upside to this: air quality in Venice has indeed improved. New satellite data shows that nitrogen dioxide emissions in Italy have drastically decreased, especially in the northern part of the country. This is good news for Venice. After all, the UNESCO World Heritage Site has been battling with overtourism, and last November, its worst floods since 1966, caused by climate change. 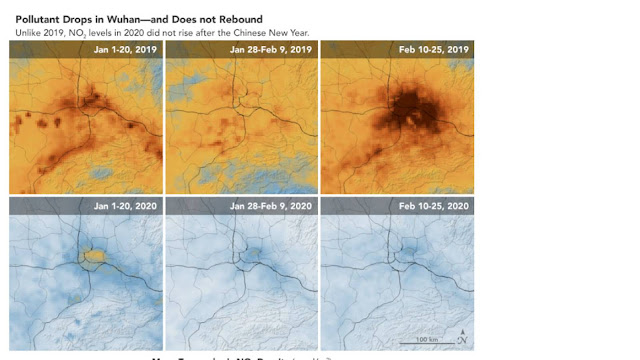 Air pollution in China, the epicentre of the outbreak, has also fallen drastically between January and February, as Chinese cities shuttered businesses and went into lockdown and social isolation. Satellite images from NASA and the European Space Agency (ESA) show that there’s been a significant reduction in nitrogen dioxide in the air, emitted by motor vehicles, power plants and industrial facilities. The improvement in air quality corresponds to the slowdown in human activities in the country.

Not far away in Hongkong, air pollution has been cut by one-third from January to February, according to studies by the Hong Kong University School of Public Health. In busy areas such as Mongkok, Causeway Bay and Central, PM2.5 particle pollutants reduced by 32 per cent. This has a direct correlation to the HK government’s measures to get people to start working from home, thus significantly reducing the amount of traffic, as well as the closures of public facilities and the lockdown in mainland China.

[This "good news" shows what needs to be done to retard climate change, or contain CO2 pollution - a drastic reduction of human economic activity - near total shutdown. Such drastic measure can be imposed and sustained in the short term. But in the long run, people will need work, income, and economic activity to generate those work and income. Which means, these curtailment of human activities, is only a pause.

Hopefully, the resumption of human economic activity can be more environmentally friendly. Perhaps this pause can be for a cause, and when we get back to work, it is with climate-friendly practices.

Well, one can hope.]