Commentary: Russia’s invasion of Ukraine a timely reminder of hard truths for Singapore 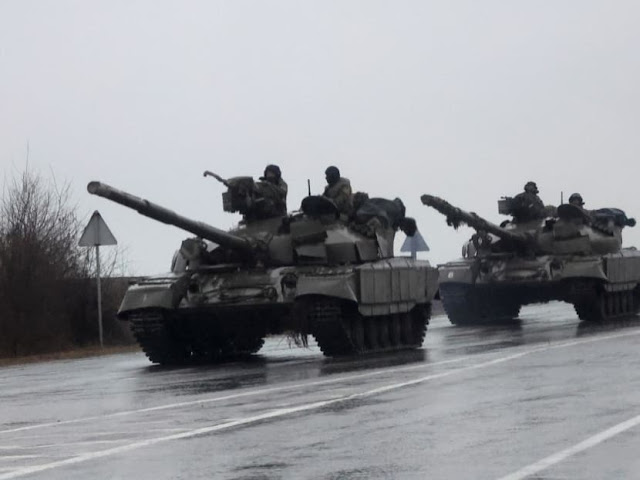 After months of building up a huge, powerful force surrounding its neighbour, Russia on Thursday (Feb 24) began what many regarded as unthinkable a few weeks ago: An invasion of Ukraine.

Despite President Vladimir Putin’s declaration that he had ordered a “special military operation” — what most initially took to mean limited armed action in the self-declared independent areas in the eastern part of the country — reports from correspondents on the ground revealed this to be an all-out assault, with explosions heard in many cities.

Apart from news junkies and others interested in international affairs, the gathering clouds of war in Europe attracted little interest in Singapore.

Various media outlets have tried to frame the issue, and its impact on us, in terms that most Singaporeans would relate to: Rising prices, supply chain disruptions and the like.

These impacts will hurt our wallets, and there is nothing more likely to make us perk up than having to pay more at the pump or supermarket, or having our orders from Amazon delayed.

But these explainers miss a larger, and much more important, point. The invasion of a sovereign nation by a much more powerful one rubs up against a fundamental tenet of Singapore — adherence to international law.
In case you missed it, the Ministry of Foreign Affairs’ (MFA) statement earlier this week encapsulated this clearly. “Singapore is gravely concerned at the escalation of tensions at the Ukraine-Russia border and the Russian decision to recognise two breakaway Ukrainian regions,” MFA said.

It added: “The sovereignty, independence and territorial integrity of Ukraine must be respected.

“All parties concerned should continue to pursue dialogue, including diplomatic means, towards a peaceful settlement of the dispute, in accordance with international law, and avoid action that will further raise tensions in the region.”

Singapore has assiduously adhered to, upheld, and promoted international law and forums since independence. The reasoning is simple. It is preferable to the law of the jungle, where, as that old chestnut goes, “the strong do what they can, and the weak suffer what they must”.

This position protects the sovereignty and independence of all countries, but particularly small ones like ours.

It protects our interests from the predatory tendencies of bigger states, but, perhaps most importantly, it means we can make our own way in the world without becoming vassals of big powers and doing their bidding while on our knees.

As Chief Justice Sundaresh Menon put it in a lecture some years ago, international rule of law is an “existential necessity” for Singapore. Mr Putin’s actions this week are in flagrant violation of the rule of law, and serve to remind us of what can happen when countries choose to break them.

The Russians’ brazen actions also serve to remind us of several hard truths.

WHAT DOES IT MEAN FOR ASIA AND SINGAPORE?

Dr Frederick Kliem, a research fellow and lecturer at the S Rajaratnam School of International Studies (RSIS), who analyses security order and multilateralism in Europe and Asia, said a prolonged conflict in Europe would divert American attention away from the Indo-Pacific region, which should be and is America's strategic focus.

Anyone watching the emergency meeting of the United Nations Security Council — called urgently by Ukraine — on Thursday morning as Mr Putin’s scheme was unfolding would have been struck by one thing: The utter futility of it all.

There was Ukraine, almost plaintively appealing to the world to save it.

Here were other nations, such as India, calling for peaceful settlements of disputes.

Through it all, there was Russia, which, in what could pass for a joke at any other time, reacted impassively as the chairman of the council.

The lesson? International law and forums are well and good, but when the rubber hits the road, you can depend only on yourself.

Singaporeans have been constantly reminded of this, most recently last week, when we marked Total Defence Day.

I’m not sure how much Feb 15 each year still resonates with many of us, since we have marked it for so many years. Like Europeans themselves, we might have become complacent, even as threats around us — and evidence of them — mount.

It is useful in these times to remember the words of Professor Tommy Koh, himself a stalwart defender and advocate of international law.

In a 2015 lecture, the Ambassador-at-large said that while Singapore believes international law is a “sword and shield” for protecting and advancing our interests, this is not based on blind faith.

In words that are remarkably prescient, he said: “We know that the international rule of law is weak and cannot deter an aggressive big power, such as Russia, from using its superior military force to secure its strategic objectives. We accept the reality that when there is a collision between law and military power, the latter usually prevails. At least, in the short-term.”

That being the case, Prof Koh went on to add, Singapore’s first principle in foreign policy is to continue to be strong, economically and militarily, to defend our interests.

Though rare, one hears arguments that Singapore should moderate our all-out pursuit of economic growth, or rethink the length of National Service, from time to time these days. As Mr Putin has shown, such sentiments can be dangerous.

Of course, there will be those who will counter that Russia is a military superpower, and that if Singapore were confronted by similar circumstances, capitulation is pre-ordained.

The point is perhaps valid, but Singapore is not Ukraine. Kyiv is a minor player on the world stage, with a relatively weak military that has been depending on shipments of equipment from the United States and others to shore up its defences.

Singapore is a key node in the global system, and many countries have a stake in our success, binding them to us in intangible ways. The Singapore Armed Forces is a well-trained, well-equipped force.

But there are several similarities we share with Ukraine.

One is a desire for peaceful co-existence with others despite differences. It is why we resort to international bodies when disputes arise with neighbours.

Another, more significant, similarity is the fiercely independent, patriotic, and resilient streak Singaporeans share with Ukrainians.

This is one key reason many prognosticators have for predicting that while Russia may be bent on what Mr Putin calls “demilitarisation” of Ukraine, he is unlikely to mount an all-out land grab. The costs will be far too high for the Kremlin to stomach.

Finally, the other lesson for us is that for all the talk of globalisation, a tide that floats all boats and such, the world is still an inherently dangerous place.

In his speech earlier this week, the Russian leader said: “Ukraine is not just a neighbouring country for us. It is an inalienable part of our own history, culture and spiritual space.”

In other words, he is taking back what he claims is rightfully his.

It’s worth bearing in mind the resonance that has in this neighbourhood.

Ukraine is not just about dollars and cents for us. It’s about deciding our own future.
[Singapore is subject to potential revanchism. We used to be ruled by Johor, was part of Malaysia, or part of the Majapahit Empire. If an idealistic revanchist were to rise to power in one of our neighbours, and seek to "Make _________ Great Again" (fill in the blanks). Of course given the current state of our militaries, any attempt to reclaim Singapore as part of a larger empire or state, would be hard to accomplish. Would that change in 50 years? 100 years? 200 years? Who knows?]

Carl Skadian was a journalist for close to 30 years, and his last stint was as Deputy Chief Editor of TODAY. He is now a senior associate director at the National University of Singapore’s Middle East Institute.
at 10:34 PM