Nature abhors a vacuum. The news media abhors a factual vacuum. In the absence of facts, speculation will do. Lies rule. Falsehoods have free rein.

Truth is the second casualty.

The mystery surrounding MH370 is resulting in 'otherworldly' advice and offers.

Ibrahim claims to have been invited by a national leader. He also said he uses a fish tap hook and bamboo binoculars to aid his search for the victims...

The Malaysian Insider
12 Mar 2014
Slow decompression may have knocked all onboard MH370 unconscious, says blog

....More....A slow decompression may have occurred onboard Malaysia Airlines flight MH370 and knocked its occupants, including its crew members, unconscious as the plane continued to fly on autopilot.

The decompression might have been caused by cracking or corrosion on the aircraft's fuselage skin, which might have also disabled communication.

These explanations are contained in a blog article....

[The speculation seems to cover all the facts, and the recommendation for search seems sound.] 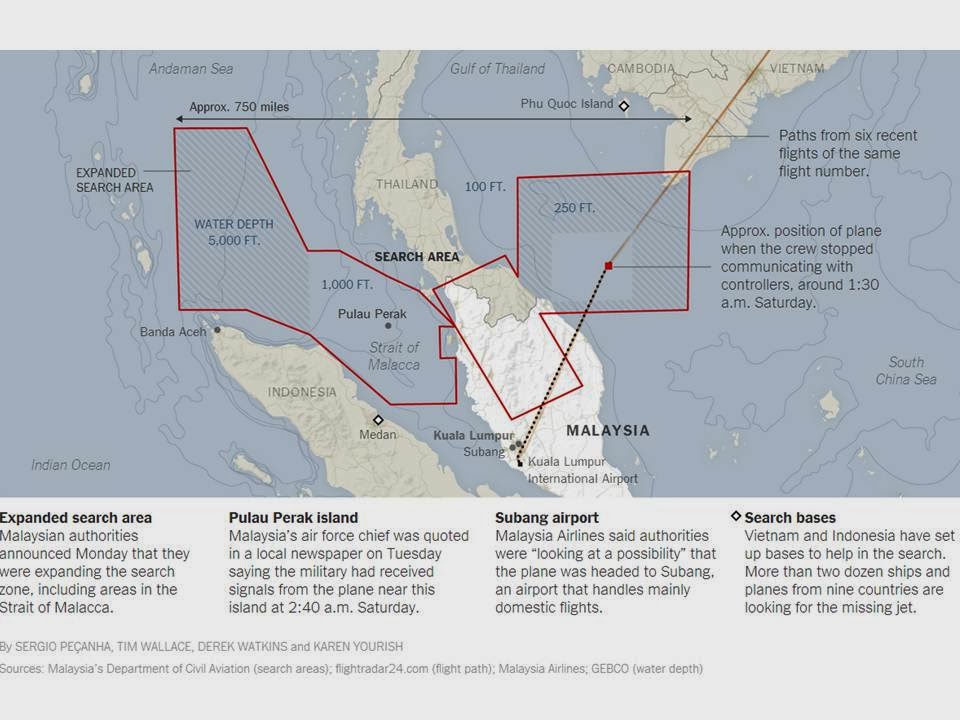 1. I refer to the Berita Harian news article dated 11th March 2014 on Search and Rescue Operations in the Straits of Malacca which (in Bahasa Malaysia) referred to me as making the following statements:
The RMAF Chief confirmed that  RMAF Butterworth airbase detected the location signal of the airliner as indicating that it turned back from its original heading to the direction of Kota Baru, Kelantan, and was believed to have pass through the airspace of the East Coast of and Northern Peninsular Malaysia.

The last time the plane was detected by the air control tower was in the vicinity of Pulau Perak in the Straits of Malacca at 2.40 in the morning before the signal disappeared without any trace, he said.

2. I wish to state that I did not make any such statements as above, what occurred was that the Berita Harian journalist asked me if such an incident occurred as detailed in their story, however I did not give any answer to the question, instead what I said to the journalist was “Please refer to the statement which I have already made on 9 March 2014, during the press conference with the Chief of Defence Force at the Sama-Sama Hotel, Kuala Lumpur International Airport”.

3. What I stated during that press conference was,

The RMAF has not ruled out the possibility of an air turn back on a reciprocal heading before the aircraft vanished from the radar and this resulted in the Search and Rescue Operations being widen to the vicinity of the waters of Pulau Pinang.

[The Berita Harian report was also quoted by the New York Times.]

The families of the Chinese passengers on the missing MH370 flight have reached their boiling point, as a flight arranged by Malaysia Airlines to bring them to Kuala Lumpur messed up in transit and landed them in India instead.

Taiwan's CitTV news segment from Mar 11 shows the anger and anxiety of the Chinese families in Beijing, fuelled by the lack of answers and conclusive evidence after the MAS plane lost contact with ground on Saturday, Mar 8.

Malaysia Airlines, in a bid to comfort the families, had offered to bring them to Kuala Lumpur to wait.

The news segment shared that about 90 per cent had declined to be sent to Malaysia.
...
Of the ten per cent which followed MAS' arrangements to go to KL, some met with an unfortunate screw-up in transit at Hong Kong International Airport -- and landed them in India instead...

Datuk Seri Shahidan Kassim today blamed the media for a series of conflicting statements attributed to government officials that put Putrajaya in the crosshairs for criticism over its handling of a missing Malaysia Airlines flight.

The minister in the Prime Minister’s Department also accused the press of “bullying” Department of Civil Aviation (DCA) chief Datuk Azharuddin Abdul Rahman into issuing contradictory information on flight MH370 and the 239 passengers on board.

“The information he has given is good. It is the extra questions asked by reporters which is causing the problem… sometimes you can see reporters asking absurd questions.

“The international reporters, they always ask questions irrelevant to the issue. If the DCA chief is being inconsistent, you tell me... what is happening is he is being bullied by the questions,” Shahidan told The Malay Mail Online in Parliament today.

A report citing a Royal Malaysian Air Force source as saying it tracked the still-missing flight to the Straits of Malacca has now partially disrupted search efforts as rescuers suspended some activity while they verify the reported whereabouts of the MH370’s last known location.

RMAF chief Tan Sri Rodzali Daud later denied that the RMAF had tracked the flight to the Malacca Strait as reported.

[When the Malaysians are found to be wanting, you can always count on them to lash out. (Mahathir lashing out at Soros during the Asian Financial Crisis, Against SG for various assorted reasons, etc). So now it is the fault of the International Media? The "Malacca Strait" information/quote from RMAF chief was reported first by Berita Harian. ]