SINGAPORE — For a young nation with limited natural resources and whose greatest asset is its people, the character and development of its people is imperative to its future.

According to the Future50 (F50) report by the Singapore Institute of International Affairs (SIIA), the Singaporean we know today is largely the product of the country’s phenomenal speed of development in the last 50 years.

The aggressive focus on economic progress, so crucial in the country’s early years, may have inadvertently bred a mindset that prioritises performance and prosperity over compassion and kindness.

While Singaporeans are generally perceived as hardworking, efficient, well-educated and technologically savvy, we may also have become materialistic. Our endeavours appear to be largely directed at progressing our careers, accumulating wealth, and improving our standards of living.

The Government, too, has consistently emphasised on meeting basic needs by focusing policy on providing jobs, adequate housing and related amenities. A strong consumerist culture exists, demonstrated by the number of shopping malls in our small city-state.

The focus on material well-being may have led to other intangible aspects being overlooked, such as compassion for the less fortunate and tolerance. We need to consider exploring a wider raft of pathways that are not defined by monetary success alone.


In recent years, there appears to be a growing disenchantment among Singaporeans with the Government, according to the F50 report.

The country now faces potential fractures due to the fault-lines of rising income disparity, anti-foreigner sentiment and fears over retirement adequacy, based on feedback from discussion groups.

Reliability issues with the country’s transport system were a hot-button topic. The F50 report attributes this to the increasing population, and also cited concern over the influx of foreigners. While such grouses may not have gained much attention in the past, the proliferation of the Internet and the growing use of social media have led to many Singaporeans voicing their views online.

Participants at F50 events pointed out that it would be impossible, and unwise, for the Government to turn a deaf ear to the vocal online community and their complaints. The Government, on its part, has made use of social media as an additional avenue to gain feedback.

Most F50 participants agree that a greater sense of citizen empowerment and belonging to Singapore is needed, although this may mean that Singapore would need to have more political leeway for views to be heard and considered.

At the same time, the Government still needs to have foresight on policies that address long-term issues while it listens more to diverse views and opinions.

The voices of non-citizens in Singapore should also not be ignored. Non-citizens will always be a part of the nation’s society, and care must be taken not to alienate or discriminate against them. 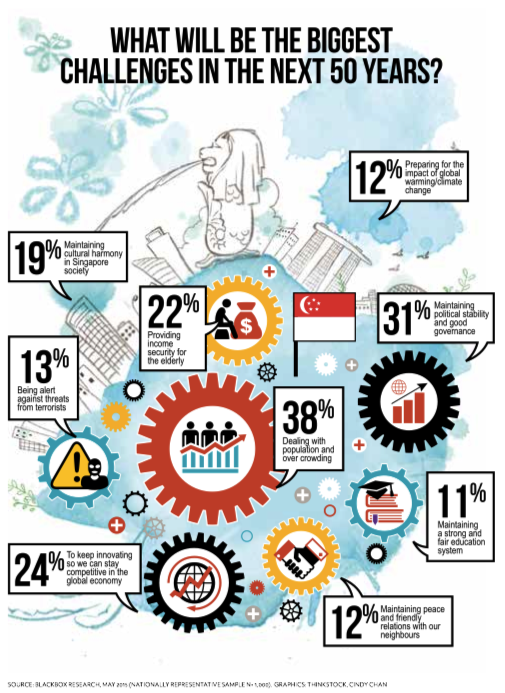 A QUESTION OF TRUST

It is not all doom and gloom as there appears to be a growing awareness among Singaporeans that it is irresponsible to criticise without trying to understand the full situation. Also, the Government has been calling for Singaporeans to suggest alternatives. Hopefully this process will result in citizens and civil society groups suggesting viable solutions and constructive new directions.

Perhaps the missing link here is trust; which needs to be built between the ruling party and the people in order for comments and solutions to be heard and actions taken, F50 participants proposed.

In Singapore, one of the key concerns is the potential disconnect between the Government and the governed. The debate over the Central Provident Fund (CPF) last year showed how easily Government policy can appear opaque to the layperson.
Another possible issue is the perceived lack of diversity among the present generation of leaders as some F50 participants feel that our current cabinet and the majority of our Members of Parliament come from similar backgrounds — highly educated and from professional fields.

This is perhaps an unintended consequence of Singapore’s principle of meritocracy but the public’s confidence and trust could be further eroded in the years ahead if our nation’s leaders are being seen as being unable to identify with the diverse needs of different segments of Singapore’s population, the F50 report said.


Identity Crisis
A contributing factor to dissatisfaction in Singapore is the nation’s continued introspective struggle, states the F50 report.

What is the Singapore identity? Given our multiculturalism and diversity, is there such a thing to begin with?

In order to establish a stable and secure platform from which Singapore can grow, Singaporeans could spend some time soul-searching and defining our identity.

The ability to define an honest identity of our own could be driven by an awareness of our history and an understanding of the personalities that shaped our nation.

This will then allow us to truly understand who we are as a people, and to develop the self-awareness and sense of identity that will help us face the challenges ahead.


This report is a collaboration between TODAY and the Singapore Institute of International Affairs.