SINGAPORE — Private home prices in Singapore may decline another 10 per cent from current levels in the next two years, BNP Paribas warned in a research report today (June 22), saying that the Total Debt Servicing Ratio (TDSR) framework would continue to curb purchasing power and is unlikely to be removed by the Government.

“A combination of weakening regional growth prospects, macro-prudential tightening and a sizeable supply-demand imbalance has taken the steam out of Singapore’s property market. The general consensus appears to be that the authorities have sufficient control over the property market to maintain the existing desirable slow bleed in residential prices,” analysts at the French bank said.

Private property prices need to fall by 10 per cent over the coming two years for the price-to-income ratio — a basic affordability measure for housing — to fall to 8.5 times from about 11 times currently, assuming household income growth at 5 per cent a year, they said. Since the peak in property prices in 2013, just as the TDSR imposed in late June that year capped total debt repayment at 60 per cent of household income, private home prices have fallen by 5.5 per cent.


[Other analysts suggests that Singapore's Price to Income Ratio is already at or better than optimum. This chart below reports a PIR of 5 for Singapore. But they may be using a different formula. 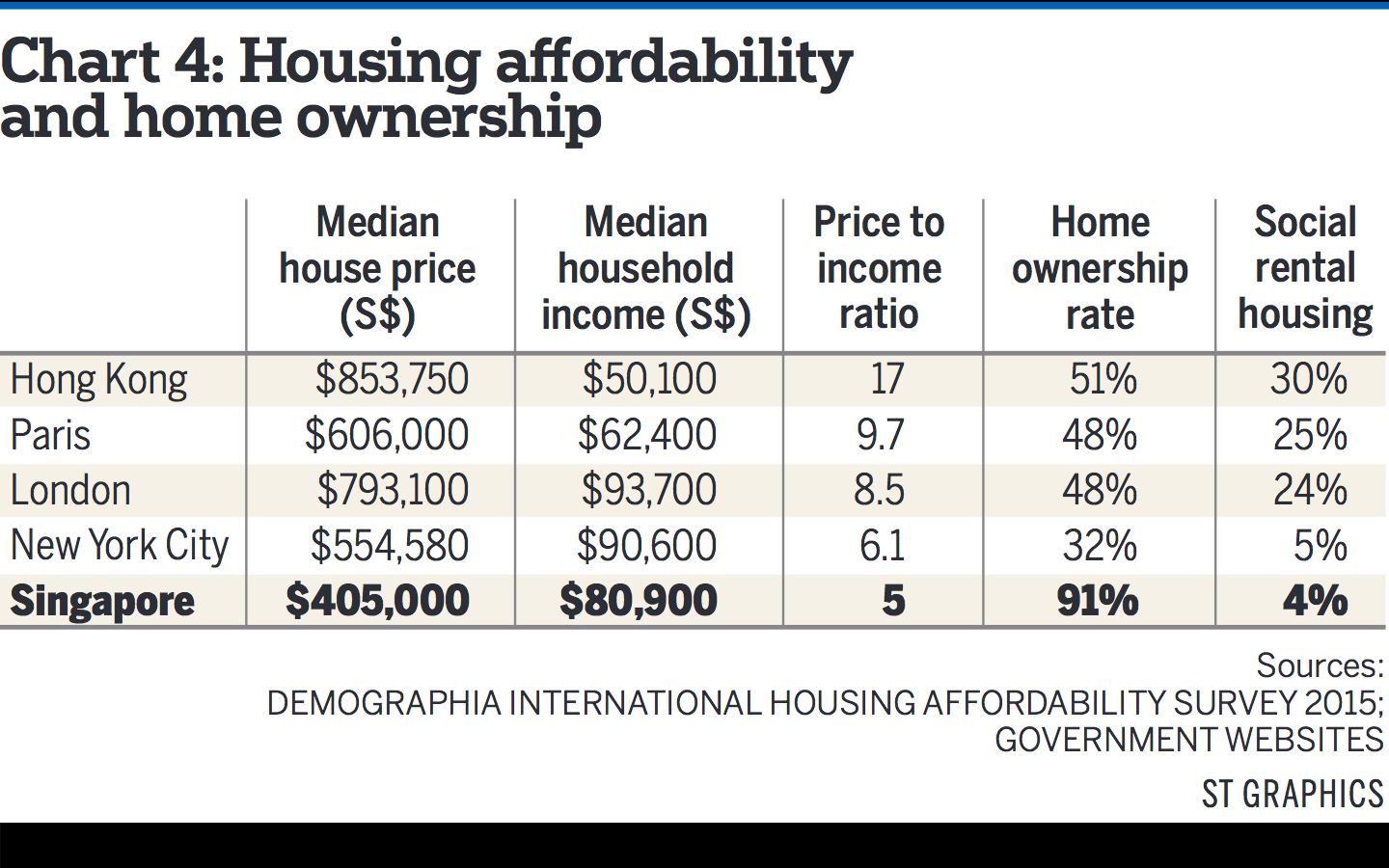 From "Home Prices and Inequality"
The report from which the chart above was derived gave SG a "Seriously Unaffordable" rating (for a PIR of 4.1 - 5.0). Above 5.1 was categorized as "Severely unaffordable". Affordable is 3.0 or less.]


“The impact of the TDSR was two-fold. First, it curbed property demand by limiting the capacity of households to purchase property. Second, it supported long-run financial stability, suggesting that private consumption growth rather than banks will bear the brunt of a property bust,” the analysts said. “Given this, the Monetary Authority of Singapore (MAS) is least likely to unwind TDSR requirements in the face of a prolonged property downturn. While this clearly offers greater policy flexibility to unwind loan-to-value ratio restrictions, it also makes TDSR a key impediment to a revival of the property market.”

The impact of the loan curb on housing is deepened further by an imminent rise in US interest rates.

“With the Federal Reserve tightening its monetary policy in the coming months, households are in for a further deterioration in disposable income with rising interest costs, and fewer households would be able to meet the MAS’ TDSR requirements as income growth would rise slower than interest costs,” the analysts said. The tightening of immigration policies since the last General Election has hurt housing demand and contributed to a supply overhang, they noted.