What is behind Duterte’s move away from the US?

Absent an official explanation, the announced decision by the Philippines to tilt away from the US would appear to be purely the product of President Rodrigo Duterte’s personal pique.

Like a play looking for a plot, Philippine President Rodrigo Duterte’s “diplomatic war” with the United States is one in search of a valid reason and a just cause. We are dumbfounded by its sheer opacity, and the prospect that we will ever see the real reason and cause for it seems rather remote. It is beginning to look like a border war between two states that have no common border to begin with.

The Philippines’ relations with China, on the other hand, appear to be warming up after six years of lying inside the freezer during the watch of Mr Duterte’s predecessor, Mr Benigno Aquino. Mr Duterte, better known as DU30 on social media, is visiting China this week, accompanied by a large business delegation, to explore trade, investment and other opportunities.

This portends seismic effects upon the politics of Asia-Pacific. Amid statements that the Philippines can stand without foreign aid (from the West), one Cabinet secretary says the China trip will bring in some US$3 billion (S$4.17 billion) in “funding aid”.

An article in The Diplomat describes DU30’s visit as a “splash of cold water” on Philippine-US relations. This is an interesting turn in a century of Philippine-Chinese and Philippine-American relations. In the US debates on the merits of acquiring the Philippines after the Spanish-American war, the US minister to China Charles Denby saw the Philippines as America’s “gateway” to the vast Chinese market.

In his article, “Shall we keep the Philippines?” (in September 1898), Denby wrote: “I recognise the existence of a national sentiment against the acquisition of foreign territory; but … we have to compete with the commercial nations of the world in far-distant markets. Commerce, not politics, is king … There is a boundless future which will make the Pacific more important to us than the Atlantic … The possession (of the Philippines) gives us standing and influence. It gives us also valuable trade both in exports and imports … We are taking our proper rank among the nations of the world.”

The prophecy has been fulfilled. The Pacific has become more important to the world than the Atlantic. But DU30 is about to turn Denby’s statement on its head: Instead of the Philippines acting as the US gateway to China, the US is about to become the Philippines’ gateway to the vast Chinese market.

It is not clear what finished products DU30 has to sell to China, which has become the manufacturing centre of the world. But clearly the Philippines stands to become a source of raw materials for China’s finished products. Is this but a passing episode in the history of Philippines-US relations? Or will it mark the decline of those relations, with all their possible effects on the power relations in the Asia-Pacific?

The Philippines’ “special relations” with the US now span over a hundred years. The relationship is far from perfect, but it has stood the test of time, despite its share of grievances and discontents.

The Philippines’ economic ties are rivalled only by its economic ties with Japan; its security and military ties are as old as America’s primacy in the Pacific, and its political ties have been watered by blood in war and cemented by shared advocacies in various forums around the world.

But in deciding to build stronger ties with China and Russia, DU30 has chosen to downgrade the Philippines’ historical ties with the US, even though the US offers no obstacle nor objection to his move towards Beijing and Moscow, and neither of them want it as the price of closer ties with them. It looks like DU30 wants to use his foreign policy to solve a domestic problem. A global storm is raging from the summary killings of drug suspects, and from DU30’s bellicose and fetid response to every question raised about it.

To salvage DU30’s wounded pride, the usual fraudsters have come up with “surveys” claiming his continued “popularity among the masses”, whatever the truth is. Yet, despite his allegedly high popularity rating, nothing remotely resembling the shadow of a consensus has emerged in support of his announced tilt away from the US.

Filipinos are, by far, the most pro-American foreign nationals in the world, according to a study by Pew Research Center, a non-partisan think tank in the US. Many of them are also pro-DU30, so they are not marching against his announced pivot. But why are they not lining up behind it, either? Obviously because they have not heard the real reason for his shift. They feel lost.

It is China that has reclaimed and fortified the disputed Scarborough Shoal in the South China/West Philippine Sea. The US is but an interested bystander who wants to see the maritime dispute settled through peaceful means under the United Nations Convention on the Law of the Sea (Unclos), while China wants it resolved as a purely bilateral issue between itself and the Philippines. Many agree that DU30 should explore wider areas of engagement with China for as long as the Philippines is unable to discuss its territorial dispute. But nobody understands why DU30 has to punish the US for it.

What precisely is DU30’s grievance against the US? He has not revealed it. Is the US unduly discriminating against Filipinos or their agricultural products? Has the US threatened to declare the Philippines a rogue or pariah state? Is the US stockpiling nuclear weapons in the Philippines in violation of our Constitution and our military agreement? Any one of these acts, or any similar acts, might be sufficient reason for DU30 to act against the US. But nothing as serious as any of these has occurred. Our political, economic or military positions are not on a collision course and have not clashed.

The only recorded incident involves DU30 calling the US ambassador a “gay son of a b***h”, and the US President a “son of a whore”, after he was asked in a news conference whether he and Mr Barack Obama would be discussing the local drug killings at the Asean summit in Vientiane, Laos. He then dusted off a 100-year-old print depicting the battle of Bud Dajo on March 7, 1906, to show that the US colonial forces had “massacred” 600 Filipino Muslims, four years after the Philippine-American war had ended, for which no one had been prosecuted.

But DU30 has not declared that this US “violation of human rights” 110 years ago and Obama’s wanting to poke his nose into the present drug killings were the reasons for his decision to tilt away from Washington. They certainly cannot be. But absent an official explanation, the announced decision to tilt away from the US would appear to be purely the product of personal pique. This would be absurd. DU30 could rise above it and he should.

Francisco Tatad is a Filipino journalist and politician. He was Minister of Public Information from 1969 to 1980 and a Senator from 1992 to 2001. This is adapted from a longer piece.


[The reason eludes the author?

It is so obvious.

Well, he is a politician. Not generally a career for the intelligent.

A comment from FB on a related news article:

When your enemy has no friends, he is most open to friendship. When everyone speaks harshly of your enemy, your soothing words would be more welcomed.

If you know what is your enemy's greatest fear, you can easily gain his friendship by fighting that fear.

Duterte is a shrewd man. He does what is necessary for the sake of his country. Principles are for cowards who will not do what must be done, whose need for validation is greater than their responsibility to those who depend on them, whose name and reputation are held in greater esteem than the need of their countrymen.

Duterte is either very naive, or very shrewd.

He is too old to be naive. So I think he is a fox. And a very smart and shrewd fox.

As neatly summarised in the FB comment, China is under international pressure and criticised from all quarters for their actions. They have no friends except those they have bought (with aid money).

A friendly face in a scowling crowd. It must have been a welcome sight for China.

And you know how in the movies when an undercover cop tries to infiltrate a gang, the gang leader would give him a gun, and a trussed up traitor or another undercover agent, and get the undercover cop to prove his bona fide by killing the enemy?

Well, Duterte might just be doing the "whack the enemy" to prove his bona fide to China.

And China is dumb or desperate enough to believe that.

I could be wrong of course.

Duterte could simply be unhinged. Or senile.

But say he is not. 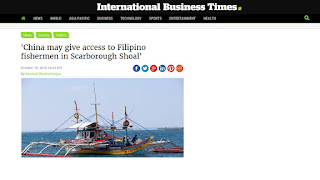 What is there for Philippines to gain? Well, China may let Philippines fishermen access the Scarborough Shoal.

Yes, It's not much of a victory for China to allow the Philippines to fish in their own waters.

BUT, now the fishermen can get on with their livelihood.

Thanks to Duterte choosing to placate the Chinese.

In a sense, his assessment of the situation is unusual but correct. If China's objective is military (the shoal has strategic military significance), and they have little or no interest in the area for fishing , then there is room for compromise. And the fishermen wins.

Duterte has also terminated war games with the US.

He may well be asking the Chinese for materiel support - weapons and weapon platforms (ships and planes). China may eager to lure this US ally from the circle of US influence and may agree. They may even agree to war games to replace the ones Duterte ended with the US.

If I were China I wouldn't.

But China is not me, and it may well agree to provide Philippines with new weapons and defence systems, and even agree to war games.

Why would China do so? Because they are arrogant, and they under-estimate Duterte. Arrogantly, they have a big power (if not superpower) world view. They cannot imagine anyone would not like to be their ally. Philippines, or rather Duterte, is just being reasonable, and realising being China's ally is only the natural and right thing to do. It is all part of the rise of China, and the fall of the US.

Also they underestimate Duterte. They look at him and they see a country bumpkin from a Third World Country. They see the President of a country of maids. They cannot imagine him being shrewd, or cunning, or duplicitous, because all that requires sophistication. Which a country bumpkin would never have.

Also they do not understand Democracy. And term limits.

If I am not wrong, Duterte's term is 6 years, and he cannot run for re-election. So after flirting with China for 6 years and cleaning up crime in the Philippines, he HAS to step down.

And his successor will almost CERTAINLY return to the fold of the US - with Chinese weapons (which the US would be interested to study), and if they have had war games with China, an insider's knowledge of China's military strategies or playbook which they can brief the US military intelligence on.

So why is Duterte moving away from the US? Because it is the easiest way to "prove" Duterte's allegiance to China.]