This is AgNews - aggregated news or articles from various sources on a topic.

The topic for this first AgNews:


By 2020 Millennials will make up over a third of the global workforce.
That’s one reason so many reports about them exist. Some say they are
disloyal, self-absorbed and lazy, while others claim they’re a generation
of digital entrepreneurs and innovators. Some aim to dispel the myths
others have created. Just type “Millennials are...” into a Google search
to see the stereotypes.

This report presented findings that were contrary to the above stereotypes of Millennials. They expect to work longer than their parents. 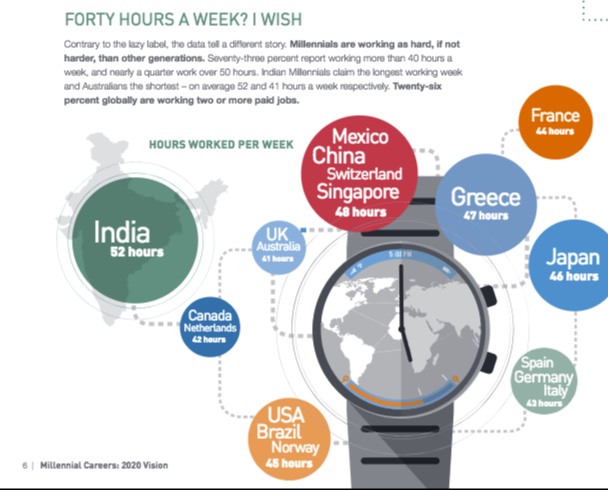 and a significant percentage (12%) expect not to retire - to work until they die. But they also expect some breaks in their worklife:


Eighty-four percent foresee significant breaks along the way, reinforcing that Career Waves are replacing the Career Ladder of earlier generations.

What do they want from work? What would they give their "loyalty" for?


Millennials prioritize three things when choosing where and how they work: money, security and time off. They want to be rewarded for their effort, feel secure in their employment and still have the freedom to stop and refuel once in a while. They also value working with great people and enjoying the time they spend on the job, together with the opportunity to work flexibly and develop new skills as priorities...

Eight in 10 Millennials in Mexico, India and Brazil say working for employers who are
socially responsible and aligned to their values is important. In Germany, the Netherlands
and Norway it’s six in 10. A majority of Millennials everywhere say purpose is a priority.


Job security is critical for Millennials, but they define it differently. They are not the job hoppers some would have us believe. Given the chance, they will move on and move up, but more often than not they expect to advance with the same employer. Like the Traditionalists before them, they want the security of full-time work to ensure they can
maintain their standard of living.

Rather than one long job for life, Millennials understand the need for continuous skills
development to remain employable. Ninety-three percent want lifelong learning and are willing to spend their own time and/or money on further training. Four out of five say the opportunity to learn new skills is a top factor when considering a new job, and 22% intend to take an extended break from work to gain new skills and qualifications.
This Millennial mindset sees individual jobs as stepping stones to self-improvement, rather than a final destination. Millennials have redefined job security as career security
—it’s the journey not the job.

So is it true that millennials are mostly "gig workers"? No. Most are in full-time jobs.


Gig work might dominate the media, but almost three-quarters of working Millennials are in full-time jobs. Even in the United States, where alternative forms of employment — like Uber and TaskRabbit—emerge faster than anywhere, only 3% of Millennials work in the gig economy.

However this may be because there aren't many "gig work" that can pay a living wage, or enough gig work to make a living. This may change in the future.

Employers also need to adapt to the needs and expectations of Millennials.


Employers need to listen up. We can’t afford not to appeal to the next generation. The
employer-employee relationship is changing. Employers have gone from being builders
of talent to consumers of work. We need to get more creative. We need to figure out how we attract and inspire the best Millennials. Investing in training and creating ways to learn on the job and move around the organization is a sure way to make companies more attractive places to work.

So what do Millennials want? Here are Seven Work Benefits to Attract Millennials.

Millennials are a lot more loyal than stereotyped:


Almost 90 percent of millennials surveyed in a new study said that they would choose to stay in a job for the next 10 years if they knew they'd get:

"This 'they're probably leaving anyway' mentality creates a self-fulfilling prophesy where business leaders don't invest in their youngest workers, who then leave as a result."
"The notion that millennials place a premium on their employer's mission is clearly an over-generalization, said Larry Yu, marketing partner at Accel. "People value career trajectory and compensation more. It shouldn't be a surprise. This generation is getting to the age where things like owning a home or starting a family is more top-of-mind."

... investing in millennial employees during their first 90 days on the job is key to retaining them. Companies need to try harder at giving millennials a valuable reason to stay, which should go way beyond free food — it's about upward mobility.
"[Millennials] want to be at a place where they own their own career trajectory"... "It's not that they want to be CEO or be a CEO tomorrow, but they want a seat at the table and want to feel like they're part of something."


"...Millennials don’t work for you, they work with you — they’re a more collaborative, inclusive generation.”

"...Growing up, the click of a mouse brought them whatever they wanted right now: Solution to homework problem, online game, fitness app, likes on social media. Their parents said they were special — ‘follow your dreams’. Employers say they’re independent, enthusiastic, thrive on culture of entrepreneurship and autonomy, and crave flexibility and work-life balance. “They’re willing to work long hours, but if they finish at 3pm they won’t want to hang around ’til 5pm twiddling their thumbs. They’re less willing to conform without thinking”

“Their research skills are excellent — they can consume and interpret vast quantities of data very quickly — but the amount of time they spend communicating using their keyboard versus face-to-face is leaving them at a disadvantage in the workplace.”
... A large proportion of most jobs involves dealing with people. “So the better you are at relationship-building and conversation skills, the more you’ll get nuances of a situation, the faster you’ll work. Inter-personal interaction is key to benefiting your organisation and your own development.”

Their screen-dependent, social-media-driven lives are always about putting out the best version of themselves. “I have yet to see anybody unhappy on social media. They hide anything negative, whereas, in a work context, it’s reality all the way.”

...problem-solving is hugely challenging for them. Used to having information at their fingertips, they don’t work through complex issues step by step. “They can make decisions very quickly without thinking of the consequences.”

There’s no doubt millennials face unprecedented pressures: The housing shortage, practical impossibility of saving for a home when rent costs more than a mortgage, not to mind challenges posed by hook-up culture for finding a lifelong mate.

...those older than millennials could help them see social media isn’t the be all and end all. And millennials have lessons to teach us: This is a generation not just about gyms and juice bars, but about stuff really worth pursuing, such as not wasting time on the small stuff; not working round the clock but having work-life balance; having a social conscience; and contributing to something bigger.

Freelancing Millenials and their Employers.


A study from 2016 entitled Freelancing in America noted that 55 million Americans – 35 percent of the country’s entire workforce – now work in a freelance capacity, contributing a whopping $1trn to the US economy last year.

Some believe this trend has gone so far that the traditional working model is already out the window. “Gone is the era of the lifetime career, let alone the lifelong job and the economic security that came with it,” wrote Nick Hanauer, a Seattle-based entrepreneur, and David Rolf, President of the Service Employees International Union, in an article for Democracy Journal. “[It has] been replaced by a new economy intent on recasting full-time employees as contractors, vendors and temporary workers.”

“In America, people are working an average of 47 hours a week – there’s no 40-hour working week any more. And now, with the advent of technology, managers expect their employees to answer emails and phone calls after work hours, with no additional pay, so employees are burning out and leaving their companies.”


Gig workers, by comparison, log an average of 36 hours per week, according to the Freelancing in America study, which is more in line with the working patterns of yesteryear.

“The flexibility is a huge benefit,” said Rob Walker, a 28-year-old freelance photography assistant. “I love being my own boss and being able to choose who I work with.”

In a survey carried out by oDesk, 76 percent of employers said they took on remote workers because they were less expensive, 46 percent claimed they could get the job done more quickly, and 31 percent cited difficulties finding local talent. “There’s been a need to cut costs in the aftermath of the financial crisis, and when you hire freelance workers, you don’t have to pay them employee benefits,” said Schawbel. “Freelancing is a way to save money. The other thing is, businesses are moving faster than ever. In order to keep up with these changes and solve problems almost on demand, they’re looking to hire freelancers who are experts and have speciality skills for a brief period of time, and then move on to solve other problems.”
In the case of the UK, this also means businesses can cut their tax bill, eradicating the 13.8 percent employer National Insurance (NI) that they’re tied to for employees.

[In SG, the employers would save on the CPF contributions.]


Millennials, the 'Gig Economy' and the future of employment contracts