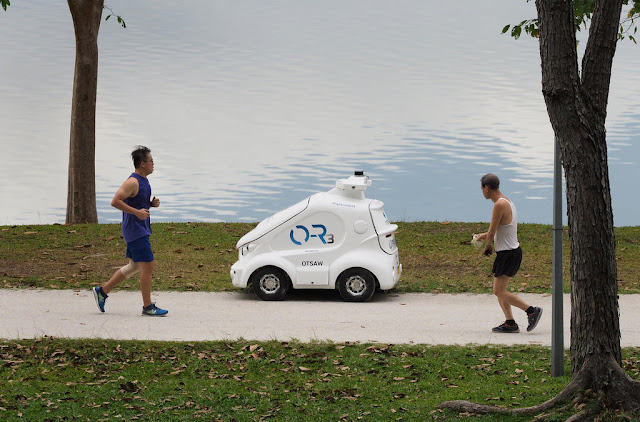 Built by Singapore robotics manufacturer Otsaw, O-R3 has a 360-degree camera, sensors and the ability to record video footage, but PUB said that it will not use the device to enforce safe distancing rules or catch errant members of the public.

O-R3 was originally part of a trial last May to support surveillance efforts at PUB’s plants and reservoirs, but is now being used this period to broadcast messages instead.

“The robot patrols around the reservoir and broadcasts messages in four languages, reminding visitors to refrain from gathering or loitering at reservoir parks and to adhere to safe distancing requirements,” PUB told TODAY.

Similar robots will be deployed at Pandan and MacRitchie Reservoirs in the future.

The agency said that trials with O-R3 were “encouraging” and that it would continue working closely with Otsaw to fine-tune the robot’s video analytics and audio capabilities. 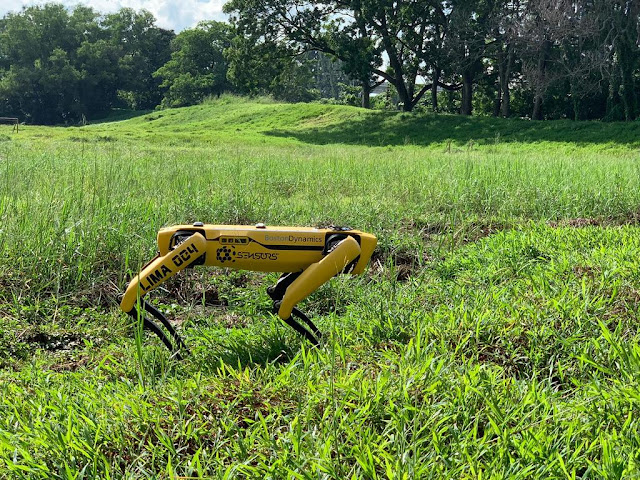 Spot the robot will broadcast a recorded message to remind park visitors to observe safe distancing measures and will be fitted with cameras to estimate the number of visitors in the park.

SINGAPORE — Visitors to Bishan-Ang Mo Kio Park will be reminded to keep a safe distance from each other by a four-legged robot called Spot, which has been deployed on a two-week trial at the park.

From Friday (May 8), the robot will ply a 3km stretch at the River Plains section of the park during off-peak hours, said the National Parks Board (NParks), Smart Nation and Digital Government Office, and Government Technology Agency — the authorities behind the pilot trial.

During the trial, the robot will broadcast a recorded message to remind park visitors to observe safe distancing. It will also be fitted with cameras to estimate the number of visitors at the park, though the authorities said these cameras will not be able to track or recognise specific individuals or collect personal data.

In a joint press release on Friday (May 8), the authorities added that if the trial is successful, Spot could be used at the park during peak hours in the morning and evening, or at other parks such as the Jurong Lake Gardens.

The robot will help to reduce the manpower required for park patrols and minimise physical contact between staff, volunteers and park visitors as it can be controlled remotely, thus lowering the risk of exposure to the coronavirus.

The authorities said that the four-legged robot is "ideal for operation in public parks and gardens" as it does not have wheels and can thus navigate obstacles effectively and operate well across different terrains.

Spot is also fitted with safety sensors to detect objects and people in its path, and has in-built algorithms to avoid collisions, though it will be accompanied by at least one NParks officer during the trial.

This is not the first time that Spot has been deployed. It is also on trial at the Changi Exhibition Centre community isolation facility, where it is used to deliver essential items such as medicine to patients.

The Smart Nation and Digital Government Group will also explore using the robot to support other Covid-19-related operations across agencies, the authorities added.

Since April, national water agency PUB has deployed a miniature car robot named O-R3 to encourage visitors at Bedok Reservoir to abide by safe distancing measures, and similar robots will be used at Pandan and MacRitchie reservoirs in the future.


[So in "War of the Worlds" by H. G. Wells, unstoppable, invincible alien invaders were eventually stopped by our bacteria and/or viruses.

We have been, in a sense, exploiting and pillaging the Earth, and this coronavirus can be seen as Earth's germ-warfare against an exploitative species (humans). It has driven humans off the streets, and into their homes.

Nature has started to return and re-occupy the land.

And now the robots have arrived!

The scene is set. Write that sci-fi novel - the new "War of the Worlds" mashed up with "The Terminator"!]