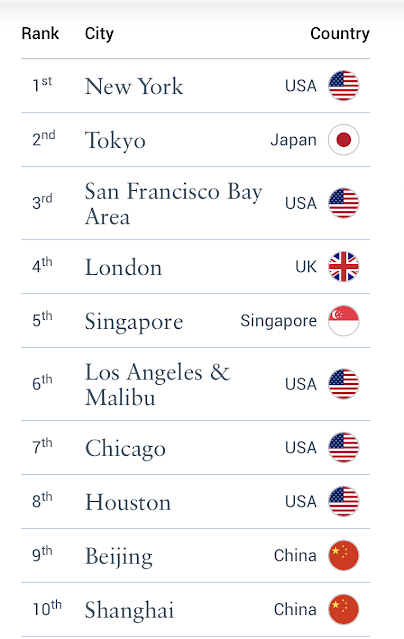 It said high-net-worth individual numbers worldwide were down by 5% in the six-month period to June 2022.
The drop was mainly due to the poor performance of major stock market indices, as the S&P 500 Index declined by 20%, while most other major indices were also down by similar percentages, it said.

H&P said the Big Apple is home to 345,600 millionaires, including 737 centi-millionaires (with wealth of US$100 million or more) and 59 billionaires.

New York is the financial centre of the US, and the wealthiest city in the world by several measures.

It is also home to the world’s two largest stock exchanges by market cap (the Dow Jones and Nasdaq).

The city comprises the five boroughs of the Bronx, Brooklyn, Manhattan, Queens, and Staten Island, and features some of the world’s most exclusive residential streets, including 5th Avenue in Manhattan, where prime apartment prices can exceed US$28,000 per square metre.

The report said Tokyo has 304,900 resident millionaires, including 263 centi-millionaires and 12 billionaires.

Its relatively low billionaire population compared to most other cities on the top 20 list shows that wealth is relatively evenly distributed in Tokyo, with the middle classes and lower-tier millionaires controlling most of the city’s wealth. Major companies based in Tokyo include Honda, Hitachi, Mitsubishi, Softbank, and Sony.

H&P said that being the wealthiest city in the world for many years, today 272,400 millionaires call London their home — a figure that includes 406 centi-millionaires and 38 billionaires.

The report added that the homes and apartments that overlook London’s parks such as Hyde Park and Regents Park, and green spaces such as Hampstead Heath, are especially affluent.

H&P noted that London has seen a steady outflow of millionaires over the past decade, with many leaving the city for nearby commuter towns such as Ascot, Beaconsfield, Bourne End, Bray, Cookham, Henley, Leatherhead, Maidenhead, Marlow, Taplow, Virginia Water, Weybridge, and Windsor.

There are a number of possible reasons for the exodus, including rising crime rates in the city, it said.

Home to 249,800 millionaires, including 336 centi-millionaires and 26 billionaires, the city state is widely regarded as the world’s most business-friendly city, and is one of the top destinations for migrating millionaires.

H&P said a net inflow of approximately 2,800 high-net-worth individuals is projected for 2022 alone, according to the latest Henley Private Wealth Migration Dashboard.

China’s capital Beijing has 131,500 resident millionaires, including 363 centi-millionaires and a particularly high number of billionaires at 44. Only New York City and the San Francisco Bay area rank higher based on this measure. Beijing also houses the head offices of most of China’s largest companies.

Shanghai is China’s largest city, widely seen as its financial capital, and is home to 130,100 millionaires, with 350 centi-millionaires and 42 billionaires. The Shanghai Stock Exchange is the third largest in the world by market cap (after the Dow Jones and Nasdaq).

Sydney on the ascent

Meanwhile, home to 129,500 millionaires, including 188 centi-millionaires and 16 billionaires, Sydney has experienced very strong wealth growth over the past 20 years and is fast becoming one of the world’s top financial centres.

Hong Kong still a base for high-net-worth individuals

Now home to 125,100 millionaires, with 280 centi-millionaires and 28 billionaires, a decade ago Hong Kong was the Asia-Pacific’s second wealthiest city after Tokyo, but has since been overtaken by Singapore, Beijing, Shanghai, and Sydney.

Notwithstanding this, many of Asia’s wealthiest businesspeople still base themselves in the special administrative region of China, and the Hong Kong Stock Market remains one of the world’s most important exchanges.

Dubai, Mumbai and Shenzhen — wealthiest cities of the future

H&P said another three cities are growing quickly and expected to break into the top 20 by 2030.

Dubai currently ranks 23rd globally, and is already home to 67,900 millionaires, 202 centi-millionaires, and 13 billionaires. The emirate has a highly diversified economy, which is strong in multiple key sectors, including basic materials, hotels, financial services, oil and gas, real estate, retail, and transport. Affluent parts of Dubai include Emirates Hills, the Jumeirah Golf Estate, and the Palm Jumeirah.

Meanwhile, Mumbai has 60,600 resident millionaires, 243 centi-millionaires, and 30 billionaires, and ranks 25th globally. The megacity is home to the Bombay Stock Exchange and the National Stock Exchange, both of which rank among the world’s 10 largest stock exchanges by market cap. Fast-growing sectors include financial services, media, and real estate.

Currently ranked 30th, Shenzhen is home to 43,600 millionaires, including 135 centi-millionaires and 17 billionaires. It is widely seen as the hi-tech capital of China, and is home to the Shenzhen Stock Exchange — the seventh-largest stock market in the world by market cap. Major companies based in the city include Huawei, Tencent and ZTE.
at 2:52 AM