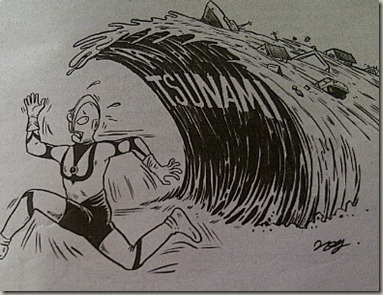 PETALING JAYA - BERITA Harian has issued a public apology over its publication of a cartoon depicting the devastating tsunami and earthquake that swept Japan and killed thousands.

The Malay daily published the apology on its website, Twitter and Facebook accounts on Sunday after several quarters demanded that the newspaper apologise for the publication.

'We apologise for the publication of the cartoon in Berita Minggu. We had no intention of poking fun at the disaster that has befallen the nation of Japan and its people. In fact, we greatly sympathise with their plight and share the sorrow of the Japanese people,' the daily's editor wrote.

The cartoon, drawn by Mohd Zohri Sukimi or more popularly known as Zoy, showed the popular Japanese icon Ultraman running away from an oncoming tsunami. The publication created a buzz on social networking sites with politicians and the public criticising the daily's poor judgment, describing the cartoon as 'distasteful' and 'insensitive'.

Umno Youth chief Khairy Jamaluddin tweeted that the paper must apologise for publishing the cartoon which was 'totally insensitive towards the Japanese'. 'It is unfortunate that it was published below Berita Harian Sdn Bhd group editor (Datuk Mior Kamarul Shahid's column),' he tweeted.

[I've included the cartoon. One comment is that it's just not funny. Offensive? Yes, because it belittles the suffering of the Japanese and their need to rebuild their lives. Instead of standing with the Japanese in this difficult and dangerous times, someone tried to make fun of it, and it wasn't even funny.
The tweets compiled and posted at
http://www.facebook.com/notes/jun-shiomitsu/japan-quake-as-seen-from-twitter-translated-by-me-so-quality-questionable/10150121176733830
show why it isn't funny.]
http://www.facebook.com/l.php?u=http%3A%2F%2Ftwitter.com%2Fbozzo1985%2Fstatus%2F46228470614855681&h=acce4
本当に感動。泣けてくる。⇒BBCめっちゃ誉めてる。地球最悪の地震が世界で一番準備され訓練された国を襲った。その力や政府が試される。犠牲は出たが他の国ではこんなに正しい行動はとれないだろう。日本人は文化的に感情を抑制する力がある。
BBC Reports
The words of BBC’s reports are so moving they make me cry. They were praising us with words of admiration! “One of the worst earthquakes in recorded history has hit the world’s most well-prepared, well-trained nations. The strength of its government and its people are put to the test. While there have been casualties, in no other country could the government and the people have worked together in such an accurate and coordinated way in the face of such tragedy. The Japanese people have shown their cultural ability to remain calm in the face of adversity.”
http://www.facebook.com/l.php?u=http%3A%2F%2Ftwitter.com%2F7474529%2Fstatus%2F46565903520907264&h=acce4
今日、募金箱に金髪にピアスの若い兄ちゃんが万札数枚入れていた。そしてその友人に｢ゲームなんていつでも買えるからな｣と言っていたのが聞こえて私含め周りの人達も募金していた。人は見た目じゃないことを実感した。そんなお昼でした。 この話感動しました。
Goth youth
A goth youth with white hair and body piercings walked into my store and shoved several hundred dollars (several tens of thousands of yen) into the disaster relief fund donation box. As he walked out, I and people around me heard him saying to his buddies, “I mean, we can buy those games anytime!” At that, we all opened our wallets and put our money into the donation box. Really, you cannot judge people by their appearances.
http://twitter.com/raai15/status/46546475362160640
バイト先に若いお兄さんたちが軍団でお酒を買いに来たんだけど、その中の一人が｢やべえ、オレお酒のためにしかお金持ってきてないから募金できん。ちょっとこれ買うのやめるわ｣って言って商品返品してそのお金全部募金してた。お友達も続々と募金しててすごい感動した。 すごいよ
Not enough money!
At the store where I work, a huge group of young men suddenly came in to buy booze. One of them suddenly said, “Oops, I only have enough money to buy booze, I can’t donate! Forget the booze, maybe next time!” and instead put ALL his money into the disaster relief donation box. One by one, every single one of the army of youths threw all their money into the box after him. What a heart-warming sight that was!
http://twitter.com/robasuke23/statuses/46326711935172609
昨日、歩いて帰ろうって決めて甲州街道を西へ向かっていて夜の21時くらいなのに、ビルの前で会社をトイレと休憩所として解放してる所があった。社員さんが大声でその旨を歩く人に伝えていた。感動して泣きそうになった。いや、昨日は緊張してて泣けなかったけど、今思い出してないてる。
Rest here!
Last night, I decided, rather than stay at the office, I should try walking home. So I slowly made my way west on Koshu freeway on foot. It was around 9PM when I saw an office building that had a sign that said “Please use our office’s bathrooms! Please rest here!” The employees of the office were loudly shouting out the same to all the people trying to walk home. I was so touch I felt like crying. Well, I guess I was too tense yesterday to cry, but now the tension is wearing off and am very much in tears.
http://twitter.com/sikkoku_otsuyu/status/46392832893796352
ドイツ人の友達が地震が起きた時に渋谷に居て、パニックになっていた所を日本人に助けてもらったらしく、その時の毅然とした日本人の態度や足並み乱さずに店の外に出てやるべきことを淡々とこなす姿にひどく感動し、まるでアーミーのようだったと言っていた。
From a German friend
A German friend of mine was in Shibuya (downtown Tokyo shopping district) when the earthquake hit. He was panicking when a Japanese passerby saved him, taking him into a building. My friend was blown away at how calm and disciplined this Japanese man was. He went out of the building with firm, unfaltering steps, did everything he was trained to do and came back. My German friend was deeply impressed by the Japanese people’s actions during the earthquake, saying they looked like a trained army.
http://twitter.com/tksksks/statuses/46403815397801984
日本って凄い。官僚も民間も、皆で助けようとしてる。トラックの運転手も有志で物資運んでるらしいし、東北の交通整備をヤクザさんがやってるという話も聞いた。最近、日本に対して誇りを持てないことが続いていたけれど、そんなことない。日本は凄い国だ。素直に感動してる。日本国の皆さん頑張ろう！
Japan is a wonderful nation!
Both the government and the people, everyone is helping one another today. There are truck drivers helping evacuees move. I even heard that the “yakuza” (gangsters, organized crime groups) are helping to direct traffic in the Tohoku region! There have been many recent developments that have made me lose my sense of pride in my country, but not anymore. Japan is an amazing place! I’m just simply touched. Go Japan!
at 9:02 AM