Piketty Is Right: These Wealthy Men Make Billions For Basically Doing Nothing


In the future foretold by French economist Thomas Piketty, the rich will keep getting richer by doing basically nothing, living off the income generated by their already massive wealth.

For many hedge-fund managers, that future is now.

The world's 25 best-paid hedge-fund managers took home more than $21 billion in 2013, mostly for charging enormous fees for keeping an eye on huge piles of money, according to a new tally by Institutional Investor's Alpha magazine.

It's a job most hedge funds do quite badly: The industry returned just 7.4 percent last year, according to Bloomberg, badly lagging the Standard & Poor's 500-stock index, which gained 30 percent.

But such poor performance doesn't come cheaply to investors, with hedge funds typically charging fees of 2 percent of total assets under management and 20 percent of profits. Last year was the fifth straight year that hedge funds trailed the S&P 500, by Bloomberg's tally. But fund managers probably don't give a damn one way or another: They get their significant cut whether they beat the market or not.

Take Steven Cohen. (Please!) The No. 2 manager on Institutional Investor's best-paid list took home $2.4 billion last year, even as he and his firm, formerly known as SAC Capital, battled insider-trading allegations, and even though his main fund lagged the market with a 20.5 percent return. Cohen had better returns in the old days, which helped justify his unusually steep 50-percent cut of investors' profits. Cohen, who was not personally charged with insider trading, from now on will just manage his own substantial wealth, estimated at about $11 billion.

Some managers did a better job earning their keep: Last year's No. 1 earner, David Tepper of Appaloosa Management, enjoyed returns of 42 percent and took home $3.5 billion for his troubles. Still: $3.5 billion dollars!! That is the benefit of managing a $20 billion mountain of money. No. 3 on the list was John Paulson of Paulson & Co. -- famous for making billions betting against mortgages ahead of the financial crisis. He took home more than $2 billion last year. He made some good bets, but it helped that he did so with a $20 billion cash pile.

Even when these people aren't managing money, they're still taking home grain silos full of cash: Renaissance Technologies founder James Simons was fourth on the pay list with $2.2 billion, despite not managing any of Renaissance's $25 billion since 2010.

"Those with sizable fortunes -- even people who are no longer managing money on a day-to-day basis -- can qualify for the ranking based simply on gains on their own capital invested in their own funds," Institutional Investor wrote.

This is pretty much the sort of thing Thomas Piketty warned us about. In his blockbuster book, Capital In The 21st Century, the economist points out that returns on capital typically outpace economic growth. That means the already wealthy will just keep getting wealthier without really having to do much, while the rest of us will fall further and further behind.

The exorbitant paychecks of men like Cohen and Tepper help explain how the top 0.01 percent of earners in this country are leaving even their fellow 1 percenters in the dust, widening an already yawning income gap. The chart below, from the World Top Incomes Database, which Piketty helped compile, tells the story: 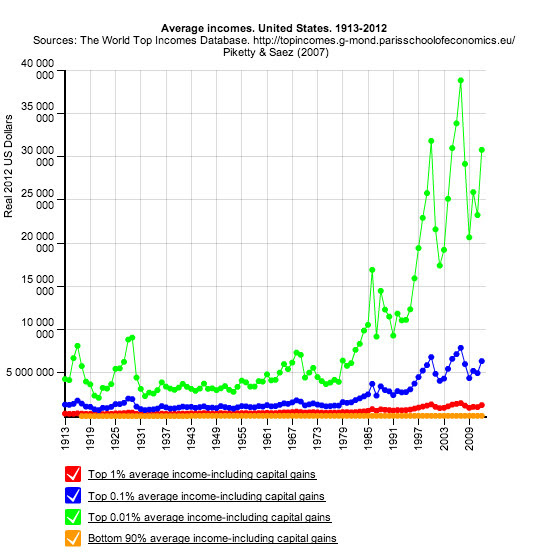 To make matters even worse, some of this vast income is being taxed at just the 15 percent capital-gains rate. Piketty has called for a global tax on wealth to slow down runaway inequality. Simply doing away with the loophole that lets hedge-fund billionaires keep so much of their often poorly gotten wealth could be a good start.