WASHINGTON — The collapse of the Western Antarctica ice sheet is already underway and is unstoppable, two separate teams of scientists have said.

The loss of the entire Western Antarctica ice sheet could eventually cause sea levels to increase by up to 4m, devastating low-lying and coastal areas around the world. The rise in sea levels may be unavoidable in coming centuries, the scientists said.

As a low-lying island, Singapore is vulnerable to rising sea levels.

Global warming caused by the human-driven release of greenhouse gases has helped destabilise the ice sheet, though other factors may also be involved, the researchers said.

The two studies were done by NASA and the University of Washington. The NASA researchers focused on melting over the past 20 years, while the scientists at the University of Washington used computer modelling to look into the future of the WesternAntarctic ice sheet. “The collapse of this sector of West Antarctica appears to be unstoppable,” said glaciologist Eric Rignot, chief author of the NASA study, in a statement on Monday. “This sector will be a major contributor to sea-level rise in the decades and centuries to come.”

“A large sector of the western Antarctic ice sheet has gone into a state of irreversible retreat. It has passed the point of no return,” Mr Rignot, who is also a scientist at University of California, Irvine, separately said. Curbing emissions from fossil fuels to slow climate change would probably not halt the melting, but it could slow the speed of the problem, he added.

The two studies between them suggest sea-level rise will be far greater than envisaged by the United Nations’ Intergovernmental Panel on Climate Change (IPCC) report earlier this year. The IPCC’s forecast on the rise in sea level did not factor in the melting of the western Antarctic ice sheet.

The NASA study, published in Geophysical Research Letters, studied the retreat of six glaciers in western Antarctica, which Mr Rignot said contained enough ice to add an additional 1.2m to sea levels around the world.

The University of Washington study, published in the journal Science, honed in on the Thwaites glacier in the Antarctic ice sheet, which the study said might have begun an unstoppable collapse that could last from 200 to 1,000 years.

A disappearance of the Thwaites alone would raise world sea levels by 60cm, but the “glacier also acts as a linchpin on the rest of the ice sheet, which contains enough ice to cause another 3 to 4m of sea-level rise”, the study said. 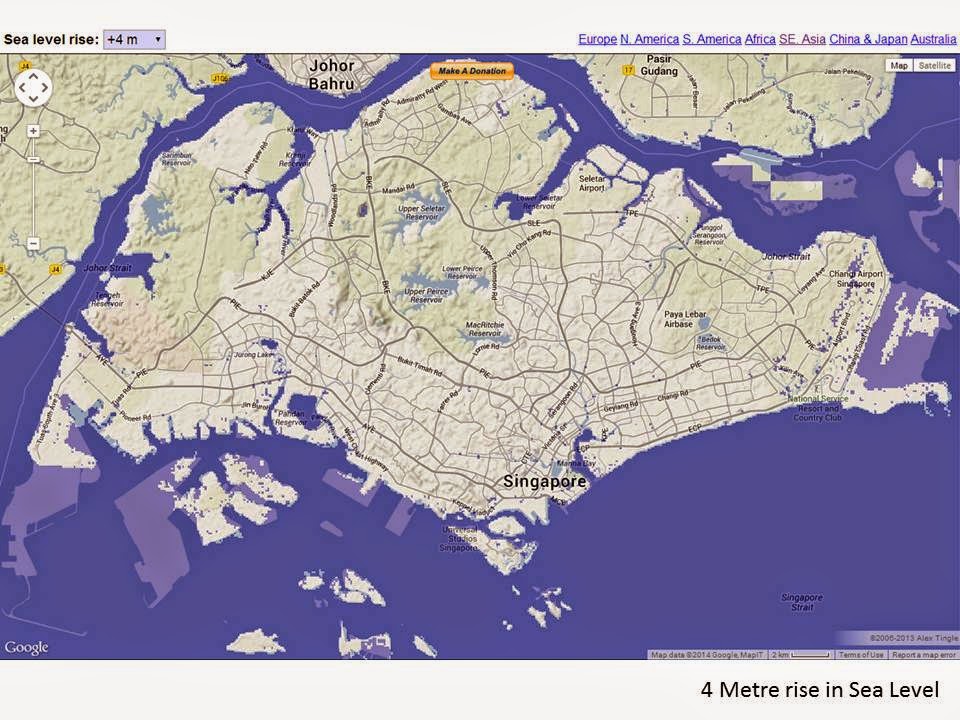 Well, most of Ubin will be soaked. And Tekong too.
We will lose quite a bit of the reclaimed land at Changi, Jurong, and Jurong Island.

Perhaps it is a good time to take those swimming lessons, if you still don't know how to swim.