SINGAPORE - There are only three solutions to a pension system's challenges, concludes an Economist article that Prime Minister Lee Hsien Loong shared in a Facebook post on Wednesday.

In his summary of the article, about the challenges the American pension system faces, Mr Lee said: people must either live on less during retirement, work longer and retire later, or save more of their salary while working.

Mr Lee added on Facebook "this is exactly what a British pensions expert told me," referring to Mr Paul Myners, an advisor to sovereign wealth fund GICand who had done a study on pensions for the British government.

Referring to the three solutions, Mr Lee said: "These are tough choices that countries - not just Singapore - are facing."

In September, the Government appointed a 13-member advisory panel to relook four key areas of the Central Provident Fund. These are: possible adjustments to the Minimum Sum beyond 2015; enabling lump sum withdrawals; offering CPF payouts that rise with living costs; and the flexibility to choose private investment plans.

Next year's Budget is also likely to contain measures that build on the Government's ongoing shifts in social and economic policy. These include moves "that the Government has undertaken over the last few years to strengthen social support and retirement adequacy", Senior Minister of State for Finance Josephine Teo had said in late November.

How to fix America’s pension system


AMERICANS are living longer but retiring earlier than they did 50 years ago. Their workplace pensions have become less generous, as has Social Security, and their medical expenses have risen. Given this, they have not saved nearly enough to provide for their old age.

It all adds up to a budding crisis, as a new book from Charles Ellis, Alicia Munnell and Andrew Eschtruth explains. There are only three solutions. Retired people must live on less, they must work longer or they must save more during their working lives. The last two options may be preferable, but they are not easy.

For most people, the main source of their retirement income will be Social Security, the government pension. This was originally designed on the insurance principle: what workers took out was related to what they paid in. But the principle was soon broken for early retirees, who received far more than they contributed. As presently constituted, the fund into which Social Security payments go will run out of money in 2033. The system is essentially “pay-as-you-go”.

Various attempts to repair its finances mean that Social Security is paying out less as a proportion of pre-retirement earnings. During the 1980s and 1990s this “replacement ratio” was around 40% for the average worker. But the formal retirement age is rising to 67, and those who retire earlier receive lower payments. The tax system also weighs more heavily on retired workers: in 1985 only 10% of Social Security recipients were taxed; now it is 37%. Medicare premiums are also rising, and are deducted directly from Social Security. The net effect will be a fall in the replacement ratio to 31% by 2030. If Congress decides to replenish the trust fund by cutting benefits, the ratio will fall even further. 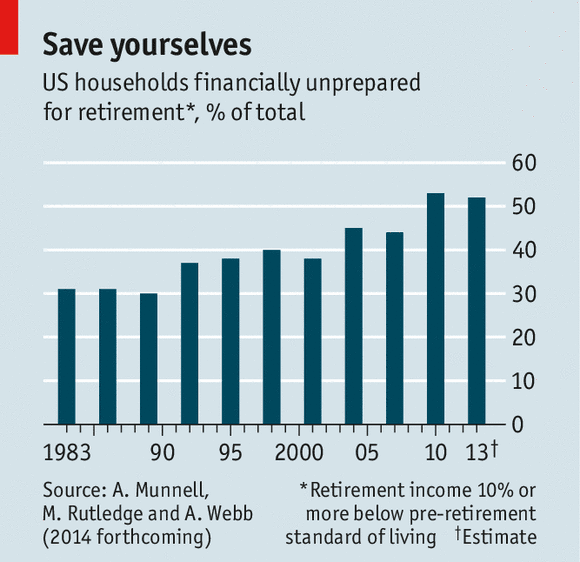 Meanwhile, for private-sector workers, final-salary pension schemes have been replaced with less generous defined-contribution schemes, known as 401(k)s. Not only does this expose employees to investment risk, the total amount contributed is low, at around 9% of annual salary.

This leaves workers short. The median household approaching retirement in a defined-contribution scheme has a pot of just $111,000. To put that in perspective, the average out-of-pocket medical expenses for an elderly couple over the remainder of their lives are $200,000.

There is some good news. In general, people’s expenses tend to fall after retirement; a replacement ratio of 75% seems reasonable. Even allowing for that, the authors calculate that more than half of all American workers will not be able to maintain their standard of living in retirement, up from 30% in 1989 (see chart).

So what can be done? Workers will need to work for longer: on current Social Security rules, postponing retirement until 70 results in a 76% increase in payments compared with taking the pension at 62. They will need to pay more attention to their pension needs: in a 2014 survey, 36% of workers had not saved anything for retirement and 56% had not even tried to work out how much they might need.

Starting early helps: the authors calculate that those who begin saving at 25 need to save 12% of their income to retire at 65. If they wait until 45, the proportion rises to 35%. When they do retire, more workers should exploit their housing wealth, either via a reverse mortgage (trading equity in their home for an income) or by moving to a smaller place.

The federal government could help by following the British lead, and insisting on, rather than merely encouraging, auto-enrolment, whereby workers have to opt out of, rather than into, pension schemes. Only half of American workers participate in some kind of employer-sponsored pension plan. Auto-enrolment boosts participation by 40 percentage points.

The government could also increase the minimum retirement age under Social Security from 62 to 64. That would require assistance for those who are physically unable to work in later life but it would encourage able-bodied citizens to keep working. Congress could also redesign tax incentives in favour of the lower-paid, matching pension contributions (with a limit) rather than making savings tax-deductible, which gives the biggest gain to the richest. Politicians seem to assume, however, that changing Social Security in any way will lead to their own retirement.