Censors are scrambling to filter or erase details of angry homebuyers threatening to stop paying mortgages on hundreds of unfinished housing projects, as regulators seek to reassure residents that everything will be taken care of.
The protests have erupted at a sensitive time for Beijing. Chinese President Xi Jinping is expected to secure a third leadership term at the 20th Communist Party Congress later this year, and social stabililty is crucial ahead of the meeting.

In a bid to appease protesters and contain the crisis, regulators and local governments have stepped up efforts to reassure critics that projects will be completed.

The banking authority has encouraged lenders to extend loans to projects, and districts - including in Henan province and the city of Chongqing - have set up task forces.

But mounting turmoil over uncompleted developments is testing Chinese social media companies, which are subject to strict laws requiring them to censor content that "undermines social stability" or is critical of the central government.

One video showing fingerprinted notices from homebuyers declaring a boycott on mortgage payments was blocked on Douyin, the Chinese version of TikTok, according to saved images shown to Reuters by a protester. The social media platform said "the content didn't pass scrutiny".

A protester in the city of Zhengzhou in Henan province surnamed Lu said a video about the mortgage boycott that he uploaded via Douyin was among the top trending items at one point. But he added that such videos could no longer be uploaded or found on the platform.

ByteDance, which owns Douyin, did not immediately respond to a request for comment on Wednesday.

Another protester surnamed Wang, also in Henan province, told Reuters he tried to upload videos about the mortgage boycott, but they were either restricted, failed to get approval, or could only be viewed by him.

On the social media platform Weibo, the hashtag #stopmortgagepayments has been censored, according to a search by Reuters. A notice says: "Due to related laws and rules, the topic page cannot be displayed."

Other videos that were blocked or deleted from social media sites included scenes of empty construction sites, protesters scuffling with bodyguards, and analyst commentaries on the boycott movement, underscoring the sensitivity of the issue.

Another protester told Reuters he could not share videos related to the crisis via China's most popular messaging service, WeChat.

Weibo, Tencent, which owns WeChat, and the Cyberspace Administration of China (CAC), the government body responsible for enforcing censorship guidelines, did not immediately respond to requests for comment.

Censorship of the issue is not limited to social media.

An official at a developer said his boss had banned staff from commenting on the mortgage protests, even off the record, due to an "order from above".

Analysts at some securities and research firms in China told Reuters they were also advised not to comment on the protests.
On a related note:
Facebook also censors anti-China content.
The screenshot below is the thread for a Youtube video posted on Facebook. The video is almost 19 minutes long and in it the Youtuber documents how he was approached by agents who wanted him to promote some traditional "cures" for Covid.
Facebook censored the posts (suspended the post) as being not in accordance to "community standards". The decision was challenged (28 January 2022), and 6 months later (22 July) Facebook replied to affirm their decision with no explanation as to how the post did not follow community standards. The only standard seem to be that the post is critical of China. In Singapore!
So they took 6 months to review my challenge, and they are unable or unwilling to provide even ONE LINE of explanation for how the post is not in "following Facebook's community guidelines."
Note that as of the date of this post, Facebook is NOT ACCESSIBLE in China.
Youtube apparently has a different standard. The video is still available on YouTube. 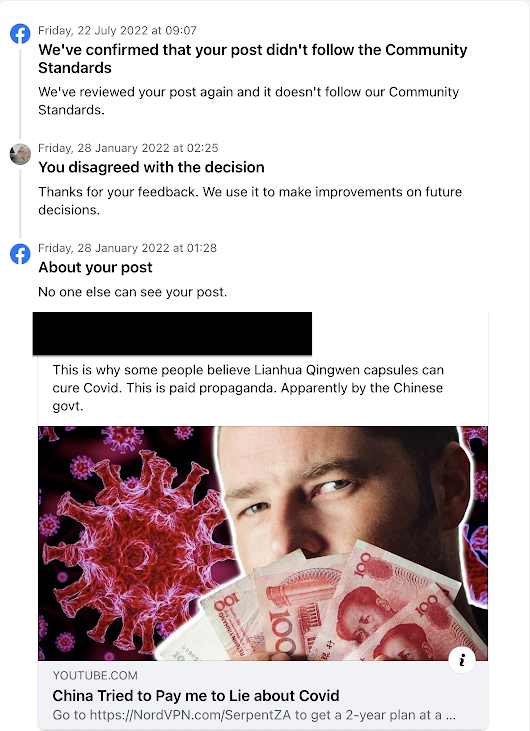