China Is Mass-Producing Islands To Extend Its Strategic Borders 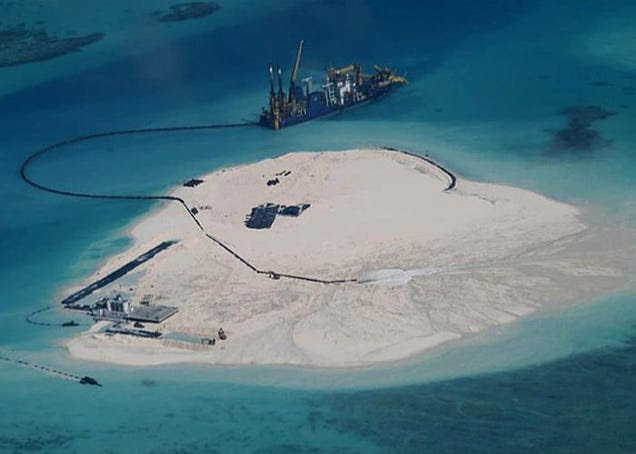 A dramatic change is taking place in the South China Sea where, since the beginning of this year, Beijing has created at least five new islands by dredging rock and sand and pumping it into reefs to form new land. By doing so, the Chinese are sending a blunt message to its neighbors and the U.S.: Keep out.


As a BBC News special report notes, China's island building is aimed at addressing what it views as a serious strategic deficit:

There are many competing claims to territory in the South China Sea, but only China and Taiwan claim to own it all.

Beijing's claim….is marked out on its own maps by the infamous "nine-dash line", which encompasses a huge tongue-shaped expanse stretching right up to the coasts of the Philippines and Vietnam and even Borneo.

For decades China has done little to enforce its vague and sweeping claim. Now that is changing.

In 2012 the Communist Party reclassified the South China Sea as a "core national interest", placing it alongside such sensitive issues as Taiwan and Tibet. It means China is prepared to fight to defend it.

This is confirmed by Prof Yan Xuetong of Beijing's Tsinghua University— a pro-government academic well known for presenting the Communist Party's view to the outside world.

China will fight, he says, if it feels its sovereignty in the South China Sea is under threat.


China's land grab at sea is primarily directed at its main strategic rival, the United States. As the U.S. Pacific Fleet continues to sail regularly through the South Chinese Sea, the Chinese Navy has become more assertive. Last December, it dispatched its new aircraft carrier, the Liaoning, to shadow the U.S. Navy cruiser, USS Cowpens. A Chinese amphibious assault ship approached and ordered it to leave the area. The commander of the Cowpens refused, saying he was sailing in "international waters."

At that point the U.S. Navy says the Chinese ship suddenly swung across the Cowpens' bow, just 1,600 feet ahead, forcing the cruiser to take evasive action.

According to the BBC, China appears to be preparing to build an airbase based on one of these new islands — Johnson South Reef (photo above) — with a concrete runway long enough for fighter jets to take off and land:


In 1823, US President James Monroe outlined what was later to become known as the "Monroe Doctrine."

It identified the Western hemisphere as America's backyard, and nowhere more so than the Caribbean Sea. Old European colonial powers were told to keep out.

Today China is doing something very similar in the East and South China seas.

Everything inside the so-called "first island chain"— which stretches north in a curving line from the coast of Borneo, past Taiwan to southern Japan— is, in Beijing's opinion, China's backyard. Beijing's ambition is to dominate this sea-space and, ultimately, to deny access to the only other naval power in the world that can prevent China from doing so.


Meanwhile, the Philippines, which also has claims in the South China Sea and is rather alarmed by Beijing's actions, is taking the case to the United Nations. It wants a ruling based on the UN Convention on the Law of the Sea, which typically gives coastal states an exclusive economic zone up to 200 nautical miles from their coastline. But China has already announced that it will not be bound by any UN rulings.
at 2:01 AM